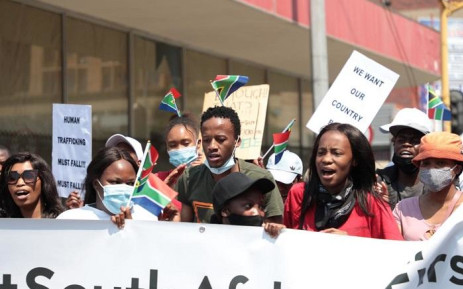 The Nigerian Embassy in South Africa witnessed a protest by South Africans calling for immigrants, especially Nigerians, to leave their country.

The group identified as “Only One SA”, on Wednesday,  alleged that Nigerians and some other immigrants are behind human trafficking and other criminal activities in the country, including drug dealings.

The country is also currently battling a steady economic decline as well as increased corruption allegations within the government.

One of the organizers of the protest during an interview with a local reported lamented the lack of action on the part of the government.

“Today we’re taking a stand to say no to human trafficking, no to child abduction, no to drugs, we need a clean country, SA must be safe and free.

Asked if the protest is not influenced by xenophobia, she said, “Look, South Africa, we have freedom of speech. They are allowed to say it’s xenophobic if that’s how they feel I cannot stop them but I know the cause that I have started it’s got nothing to do with xenophobic but it’s got everything to do with saving the small children.

“Children are going missing every day and the government is not doing anything about it… Nigerians are known for being perpetrators of these cases.

She also said that there have been numerous cases regarding “drugs and human trafficking but nothing is happening, that Mildred police station is rotten to the core, the Nigerians are just paying them to do as they like”.

There will be no burials today as thousands of funeral industry employees have downed tools. They're vowing not to collect corpses from both government and private hospitals as well as from homes. eNCA's Tshego Moagi is monitoring the strike in Gauteng.

Related Topics:CoronavirusFeaturedZlatan Ibrahimovic
Up Next