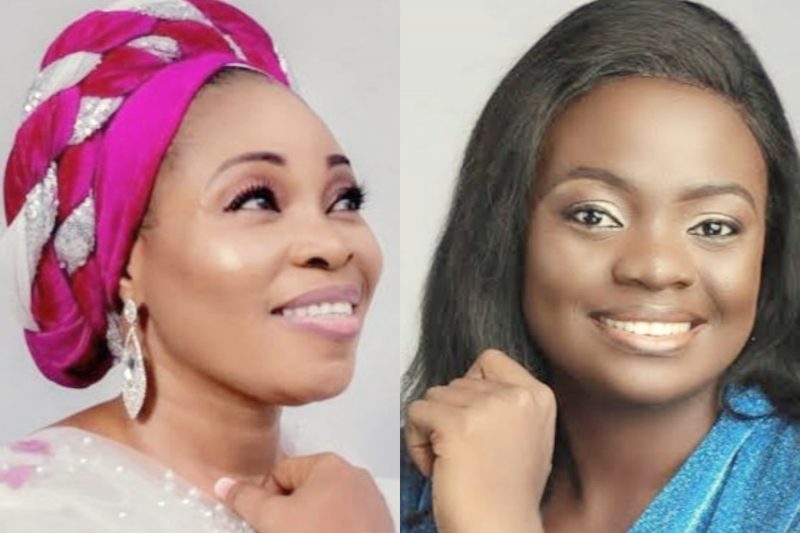 Singer and composer, Tope Alabi on Saturday received backlash from Tweeps following the manner she downplayed the relevance of ‘Oniduro mi,’ a gospel song made popular by Adeyinka Alaseyori.

In a viral video shared that surfaced on social media yesterday, the evangelist could be heard publicly chastising the song.’

She claimed that it was wrong to refer to God as ‘Oniduro mi’ meaning my guarantor.

According to Alabi, the Holy Spirit had cautioned her when she tried to sing along.
She said;

“God is not my own guarantor; he is more than a guarantor to me. I love the song too but the day I tried singing it, the holy spirit told me to shut up,” she said in Yoruba dialect.

The mother-of-one went further to say that when one receives songs from the Holy Spirit, it always needs to be refined to avoid singing rubbish.

“This is not about condemning the song; when you receive a song in the spirit, it is supposed to go through some refining with the Holy Ghost before producing it, else, you will just be singing rubbish,” she added in part.

Her scathing remark in the viral video that hit the internet has been criticized by many of her followers, who dragged her to filth, with many saying she is ‘jealous’.

The first attack came from @Olufemi_Adedeji who said he doubts that Tope Alabi listened to herself before she spoke.

He wrote; “I doubt if she actually thought about this before saying it publicly, because from where

I’m standing calling God your guarantor is a perfect description of someone whose backing gives you confidence and can stand for in troubled times, she just being jealous”

In another comment, @LifeOfAdunni said Tope Alabi just spoke with no valid point or reason.

“I just watched two minutes of utter rubbish, talking with no valid or reasonable point”, she wrote.

@RosemaryOcheze took the fight straight to her home as she advised the singer to tame her randy husband instead of reducing another person’s work to nothing.

“She don collect work from Bola Are, deputy holy spirit, she should better tame her randy husband instead of talking down on another. rada rada ”

According to @Abdulhaphiez, this isn’t the singer’s first time, as she once claimed Sola Allyson wasn’t a gospel singer.

“No be her first time be this, That was how she said Sola Allyson wasn’t a gospel singer”.

@TA_sammie said Tope Alabi is just being a hypocrite.

“This is pure hypocrisy from Tope Alabi, I think the song was inspired by the situation the person was into then, even David wrote a Psalm in the time of trouble.”

@teeemorney said that she should have kept her opinion to herself.

“Oniduro could also mean ‘My Pillar’, She should have held her opinion private though. Nothing wrong in saying God is my guarantor or pillar. Only God can translate our requests to mean what we desire. We can only ask through our different languages ”

@Tife_fabunmi said Tope Alabi that gets paid to play at Politicians home is berating someone else’s music.

“Someone that gets paid to come and play at politicians homes, lol this is hypocrisy, she will be fine”.