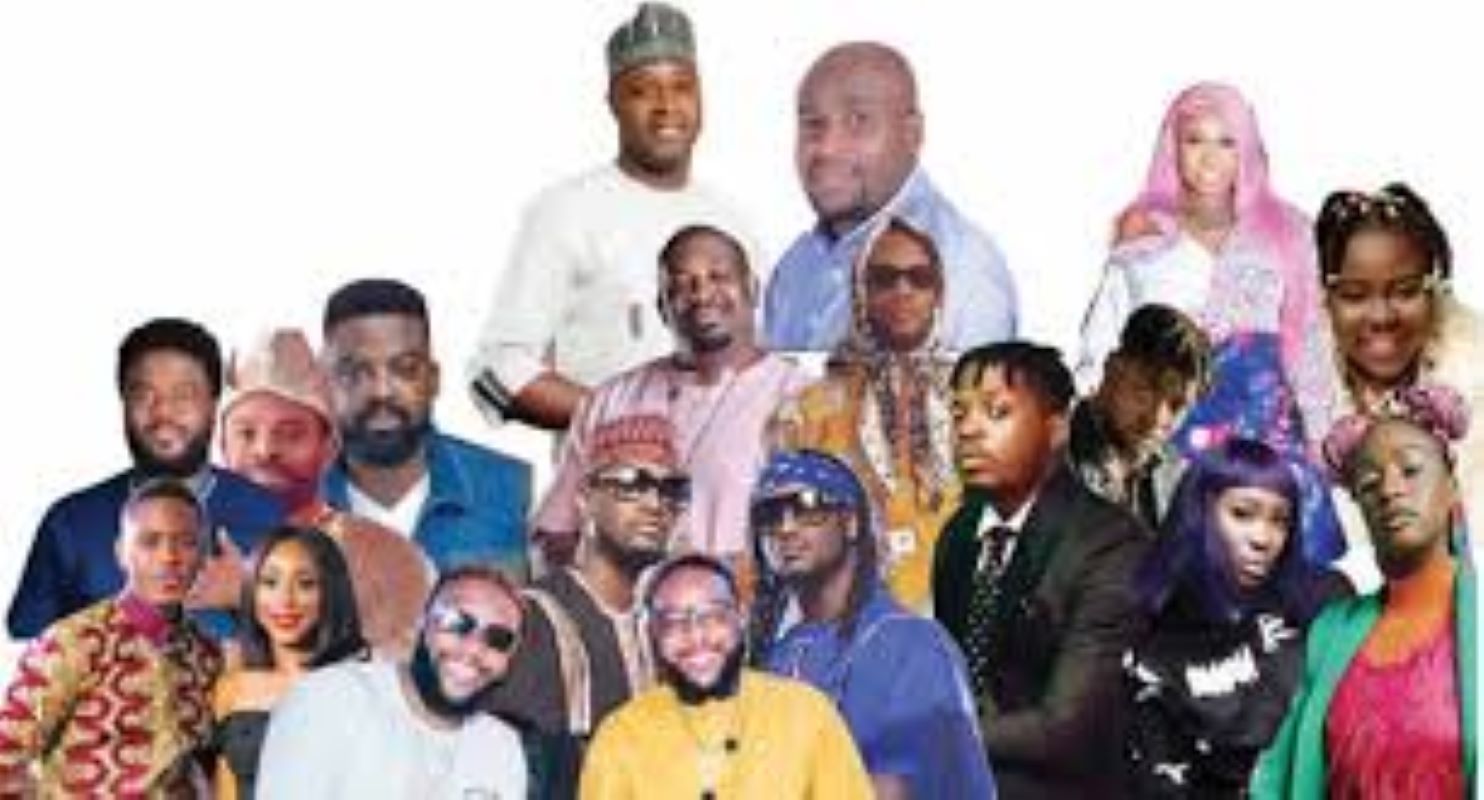 Entertainment has become a family tradition for some wonderful personalities in Nigeria and lately, there are a number of successful relatives making strides in the industry.

Although some were ‘inherited’ the craft from their parents, like the Afolayans and Kosokos, some are simply pioneers in the family, like the Ajerehs and Okonkwos.

Find below a few celebrity siblings you can’t possibly miss in the industry:

The late legendary filmmaker, Ade Afolayan, aka Ade Love, would most likely be happy in his grave because some of his children have continued to solidify his legacy in the film industry.

His son, Kunle, is undoubtedly one of the most respected African movie directors at the moment. Kunle first came to limelight as an actor when he featured in Tunde Kelani’s movie, ‘Saworoide’. He acted in other films but it was not until Kunle started directing movies that he started getting ‘real’ acclaim. Some of his award-wining movies include, ‘Citation’, ‘The CEO’, ‘October 1’, ‘The Figurine: Araromire’, ‘Phone Swap’, and ‘Mokalik’.

In a similar vein, Moji, who is Ade Love’s first daughter, got more than just her good looks for him. She is also an actress that is doing well in the movie industry.

She trained as a teacher but she has spent most of her life in the filmmaking world. As a matter of fact, she featured in ‘Lehin Oku (After Death)’, Ade Love’s last movie before his death.

Some of the movies she has featured in are ‘Ikoko Emi’, ‘Orisa Opoki’, ‘Se Ala Ni’ and ‘Arinjo’. Her production credits include ‘Tojubole’.

She is married to a fellow actor, Rasaq Olayiwola, aka Ojopagogo’.

Aremu is also an actor. He produced the movie, ‘Idamu Akoto’ and has appeared in several others, including ‘Osole Yahoo’, ‘Omolakeji’ and ‘Agbodega’.

Their younger brother, Gabriel, is also one of the most prolific actors in the country at the moment. He has garnered several acclaims for his superb portrayal of roles in movies such ‘Coming from Insanity’, ‘Citation’, ‘Gold Statue’, ‘Hoodrush’, ‘Madam Dearest’ and ‘Kasala’.

Gabriel is also a wonderful singer and has released songs such as ‘Kokoro Ife’, ‘Plug It’, ‘Awelewa’, and ‘Kpasi Kona’.

Sola is an actress and director who has several films under her belt. Some of the movies she has appeared in are ‘Pala Pala’, ‘Laroda Ojo’, ‘Omo Bishop’, ‘Oko Irese’ and ‘Palace’. She has also produced movies such as ‘Shindara’, ‘Ese Mi’, ‘The Voice’, and ‘Unpredictable’. Sola is quite fond of her father and says she got a lot of things from him.

Bidemi is also a popular actress and has featured in movies such as ‘Oun Oko Somida’, ‘Korikoto’, ‘Wicked Wife’, ‘Asiri’ and ‘Reloaded’.

Dakore Akande (nee Egbuson) is undoubtedly a talented actress and her repertoire of over 50 movies prove that.

She has been in the industry for well over a decade and it is safe to say that when it comes to her craft, she is not pushover. Her fans are often gripped by the passionate way she brings her character to life, with the look of a ‘girl next door’.

Some of the movies she has acted in include ‘The Set Up’, ‘Chief Daddy’, ‘Coming from Insanity’, ‘Lunch Time Heroes’, ‘New Money’, ‘Fifty’ and ‘Silent Tears’.

Dakore’s younger brother, Timini, came into the industry well after her and he is also doing quite well for himself. Described as an actor, producer and digital creator on his Wikipedia page, Timini, is one of the young actors catching the attention of many at the moment. He won the Best Actor in a Drama award at the Africa Magic Viewers’ Choice Awards 2020 for his role in the movie, ‘Elevator Baby’.

Femi Adebayo is one of the most sought after actors in the Yoruba sector of the movie industry and that is not just because his father is the veteran and respected actor, Adebayo Salami, aka Oga Bello.

Femi has proved to be a natural actor in front of the camera and he has won lots of fans for his onscreen antics. He has acted in a variety of movies such as comedy, action and drama. The trained lawyer has appeared in several movies including ‘Apaadi’, ‘Ayitale’, ‘Shola Arikusa’, ‘Heaven on my Mind’ and ‘Kodi Ologbon Aye’. He has also produced movies like ‘Jelili’ and ‘Iro Funfun’.

On his part, Tope is an actor and a movie director. As an actor, he has starred in films such as ‘Jenifa’, ‘Igberaga’ and ‘Omo Pupa’. He has left his imprint as a director on several movies including ‘Etiko Onigedu’, ‘Aseyiowu’, ‘Ijo Omo’ and ‘Alade Owala’.

Niniola Apata hit the limelight with her song, ‘Ikebe’, after her stint at MTN Project Fame singing competition. She has gone on to release several hit tracks such as ‘Maradona’, ‘Omo Rapala’, ‘Sicker’ and ‘Fantasy’.

Her younger sister, Teniola, is also currently the entertainment industry by storm with her music, which fans cannot seem to get enough of. Many of her songs have become anthems of sorts and she continues to churn out more. Some of the songs are ‘Case’, ‘Billionaire’, ‘Power Ranger’, ‘Fargin’ and ‘Uyo Meyo’.

Their father was a retired military officer who was assassinated in Lagos many years ago, while they have different mothers.

When it comes to making good music, Don Jazzy is a legend of sorts. Born Michael Ajereh, Don Jazzy started honing his skills at an early age. He reportedly started playing the bass guitar and piano at the age of 12. He also worked with the 419 Squad in the United Kingdom before he returned to Nigeria to form Mo’Hits Records with D’banj. He was responsible for the production of several hit tracks churned out by the record label before it went defunct. He went on to form Mavin Records, which is still one of the top record labels in the country at the moment.

His younger brother, Charles, aka D’Prince, has also been following in the footsteps of Don Jazzy. They were together in Mo’Hits and also moved to Mavin Records. D’Prince has released songs such as ‘Banana’, ‘Omoba’, ‘Amarachi’, ‘Give it to Me’, and ‘Jonzing World’.

Call Olamide Adedeji, aka Olamide Adedeji, one of the most prolific rappers Nigeria has ever produced and you would not be wrong. He hit the limelight with his song, ‘Eni Duro’. And even though some people initially dismissed him, saying he was trying too hard to imitate the late rapper, Da’Grin, Olamide did not give up but kept giving his best to his career. And now, even the naysayers of yesterday have now become his fans.

Some of his hit songs are ‘Durosoke’, ‘Bobo’, ‘Wo’, ‘Eyan Mayweather’, ‘Omo toh Shan’, ‘Loading’, ‘Triumphant’, ‘First of All’ and ‘Stupid Love’. He is also the founder and Chief Executive Officer of YBNL Records.

Olamide’s younger brother, Eniola, aka DJ Enimoney, is also a disc jockey of note. He is Olamide’s main DJ and they often travel the world together, performing at different concerts and events. He has also enlisted other artistes to record songs such as ‘Diet’, ‘Gapa’, ‘Oya Dab’ and ‘Spending Cash’.

Tolani, Ifeoluwa (DJ Cuppy) and Temi are the quintessential examples of people born with silver spoons. Their father, Femi Otedola, is a billionaire businessman. But, rather than go into business like their father, the sisters have decided to pitch their tents in the entertainment industry.

The eldest of the sisters, Tolani, has released songs such as ‘Liar’, ‘Ba mi Lo’, ‘Bad Man’ and ‘Maybe Baby’.

DJ Cuppy, on her part, is a disc jockey, philanthropist and singer. Some of the songs in her repertoire are ‘Green Light’, ‘Jollof on the Jet’, ‘Gelato’, ‘Currency’ and ‘Abena’. She is also the founder of The Cuppy Foundation, where she has done a lot to help the underprivileged.

The youngest of the sisters, Temi, was until recently known only as a style blogger by virtue of her website, JTO Fashion. However, she shocked many when she played the lead role in Kunle Afolayan’s recent movie, ‘Citation’. Considering that it was her first major outing as an actor, many people feel that she did not do badly. In the movie, she had to speak French, English and Yoruba.

Peter and Paul Okoye of P-Square used to be the toast of Africa until they went their separate ways some years ago.

As P-Square, they were one of the biggest artistes in Africa and they had a rich repertoire of songs including ‘Chop My Money’, ‘Temptation’, ‘Bank Alert’, ‘Alongo’, ‘Oyinye’, ‘Bizzy Body’ and ‘Danger’.

However, the duo has continued their careers as solo artistes. Peter, who now goes by the name Mr P, has released songs such as ‘One More Night’, ‘Too Late’, ‘I Love You’ and ‘Wokie Wokie’.

Meanwhile, Paul, aka Rudeboy, has churned out several songs including ‘Woman’, ‘Reason With Me’, ‘Somebody Baby’ and ‘Nkeji Keke’.

Their elder brother, Jude, is also a director and was the manager of the defunct P-Square.

Kingsley Okonkwo, aka Kcee, is a singer and the co-owner of Five Star Music. Beyond his music, his fans are aware that his younger brother and Five Star Music co-founder, Emeka, aka E-Money, is very dear to him. For one, Kcee mentions E-Money’s name at the beginning of all his songs.

E-Money is also a businessman and philanthropist.