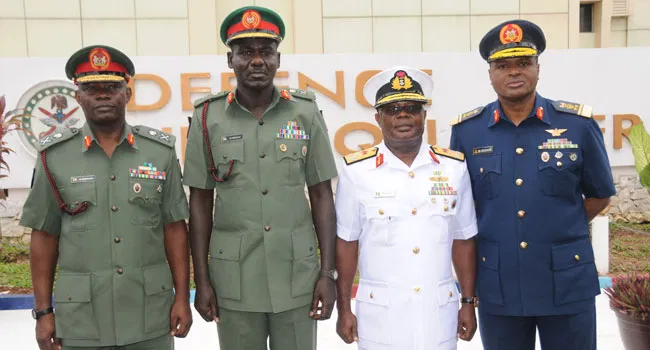 The move by the President, Major General Muhammadu Buhari (retd.) to change his service chiefs on Tuesday has received numerous reactions from Nigerians.

It appears to be one move long overdue as many Nigerians have, for long, called for the replacement of the crop of service chiefs following the rise in insecurity in the country.

Speaking on Tuesday, the President on his verified Twitter account said: “I have accepted the immediate resignation of the Service Chiefs, and their retirement from service… I have also appointed new Service Chiefs, to replace the retired officers.”

While there might be a debate amongst some people about whether the service chiefs retired, got sacked or replaced, many will be satisfied that a change has finally been made by the president.

But away from the grammar, context as well as politics, WuzupNigeria brings you the honest opinion of Nigerians from Twitter about the replacement of the service chiefs.

Reacting to the news on Twitter, Reno omokri said: “I commend General @MBuhari  for listening to voices of reason and sacking his clueless and nepotistic service chiefs. Good riddance to bad rubbish. It is disappointing that he maintained his practice of appointing largely Northern Muslim males, but half bread is better than none.”

I hope this new army chief’s military ability is as frightening as his face! Merely looking at him is enough to give Boko Haram and herdsmen a scare. His bite better be worse than his bark. On a serious note, will #Buhari die if he appoints a non Muslim Northerner as army chief? pic.twitter.com/be6KVqLpLW

The sacked Service Chiefs only served themselves and their pockets and can at best be described as “Disservice Chiefs” under whom Nigeria became completely insecured.

Finally, Buhari has fired and replaced the Service Chiefs who were appointed in 2015. We are in a mess and insecurity is a major issue. I hope the new Service Chiefs will deliver.

If Buhari has any shame or conscience left in him, he would have joined his service Chiefs to resign tody. He is more incompetent than any of them.

When the head is rotten, every other part of the body becomes useless. Buhari is the cancer destroying the soul of this country.

Point of Correction: President Buhari did not sack the Service Chiefs. Rather, Buratai, Chief of Air Staff, Chief of Defence Staff & the Chief of Naval Staff all wilfully fired themselves after the President was unable to do the needful despite the prolonged public outcry

Apart from the Service Chiefs, the remaining person to sack is Major General Muhammadu Buhari (rtd). The retired general under whose regime kidnapping & armed banditry have gone unabated.

According to Morris Monye, @Morris_Monye: “If President Buhari thinks the Service Chiefs had “Overwhelming achievements” and thinks giving them a soft landing by “accepting their resignation” is the best, then it speaks of incompetence from the Presidency. Saying “I fired them” sends a message that you are in charge.

“But to be honest, President Bihari should have “resigned” with the Service Chiefs. The incompetence is historic! But hey, I will take this small win.”

The reign of the most incompetent service chiefs in recent history has finally come to an end.

Appointing new Service Chiefs will not change anything, they are nothing but tools in the hand of a tyrant.

Let’s remember that this same govt replaced Ibrahim Kpotun Idris with Mohammed Abubakar Adamu as the IG of Police, what did we get? I’m not expecting anything “messianic” from the new Service Chiefs, as long as they still report to Buhari.

Let’s remember that this same govt replaced Ibrahim Kpotun Idris with Mohammed Abubakar Adamu as the IG of Police, what did we get? I’m not expecting anything “messianic” from the new Service Chiefs, as long as they still report to Buhari.

The best news I have heard this year is the appointment of the new service chiefs. I am so excited, not because it will abruptly bring the end to the years of insecurity, but at least we would give another set of military men the opportunity to grow and try their best.

Funny people and comments….sacked, retired, fired. Thought what we wanted was for the service chiefs to go because they’ve overstayed, why are you people expecting them to be “fired”? For what offense?

APPRECIATION TWEET: MAY GOD IN HIS INFINITE MERCIES BLESS THESE BRAVE, GALLANT AND FINEST OFFICERS OF @DefenceInfoNG, THE FINEST, MOST DISCIPLINED AND MOST SUCCESSFUL NIGERIAN SERVICE CHIEFS EVER….THEY DROVE THE TERRORISTS FROM ABUJA, JOS, KADUNA, KANO, MAIDUGURI TO LAKE CHAD pic.twitter.com/3dOgGJsPoB

Replacing or sacking the now ex service chiefs is a welcome development but replacing the outgoing incompetent Army chief with someone the army chief had fired in 2017 for incompetence in tackling the boko haram insurgence pretty much sums up this government ?

Best decision made by Mr president, we expect the new service chiefs to bring their wealth of experience to bear as they will fight and tackle insecurities in the country to zero level

May Almighty make it better option for our country?

Firing the Service Chiefs is the best news for me today.

The new ones should be given a mandate to secure the country or get fired too. Nobody is indispensable enough not to be fired. @HQNigerianArmy @NigAirForce @NigerianNavy @DefenceInfoNG

Sacking or resignation of service chiefs without the immediate resignation of their head @MBuhari is just like fighting symptoms instead of the virus that is responsible for the symptoms. Buhari is the root of our numerous problems & should be the first to resign.#RevolutionNow