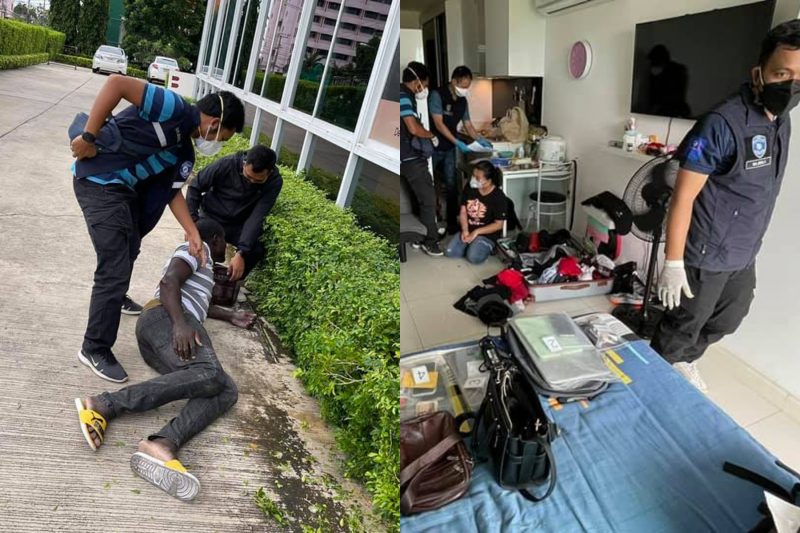 Police in Thailand have arrested a Nigerian man identified as Robinson Ibuka Ade after he tried to flee by jumping out of a third-story building in Pattaya.

The Pattaya News reports that the man and his partner, a 23-year-old Thai female national, Thidarat Biraban, were arrested for allegedly jointly committing an online romance scam in Thailand.

The arrest took place after some victims in Nakhon Sri Thammarat filed a complaint that they had been defrauded by an Instagram account user, “davilalinda720”, who allegedly claimed to be an American soldier who fought in Syria.

At least 40 victims who filed similar reports at Don Mueng Police Station claimed that they were scammed by the same Instagram account and lost 112,000 baht in total.

Upon their arrest, cash of 148,000 Thai baht, 2,000 US dollars, and two ATM cards were discovered and confiscated by the Thai police.

Following an investigation, the police discovered that the account owner was living in a condo in Pattaya. An arrest warrant was issued and they stormed his residence.

The Nigerian and his partner were discovered inside the room. However, he attempted to escape by jumping out of the window but was caught by policemen who were stationed outside the condo.
Related Topics:romance scamThailand
Don't Miss