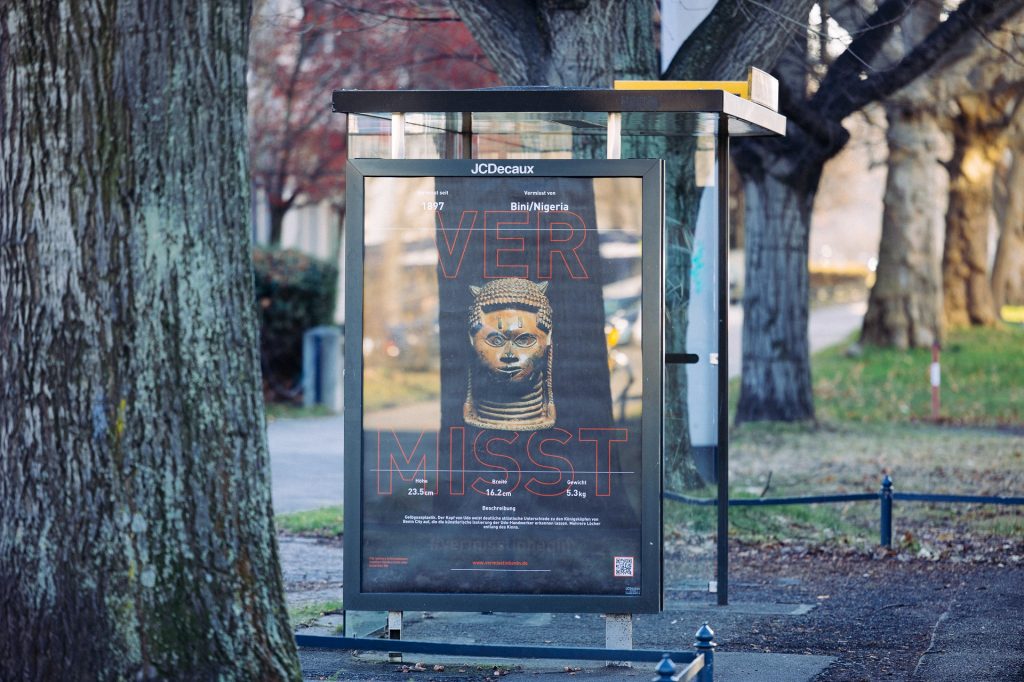 A Nigerian artist named Emeka Ogboh has flooded the German public with hundreds of posters bearing photos of missing artifacts of the Benin Empire.

Ogboh embarked on the prohjectd which flagged off on December 29 in an attempt to remint the Germans of their role in his native country’s missing heritage.

Artnet reports that Ogboh pasted the ‘missing’ poster series throughout more than 200 locations in Dresden, which is home to five notable objects from the former royal palace in Benin.

In 1897, the palace was looted and razed by British soldiers during a punitive expedition, and the bronzes are now dispersed throughout major international Western museums. Germany holds the largest number of the objects of any country.

Ogboh’s posters depict five of the bronzes currently in the collection of Dresden’s Museum für Völkerkunde, alongside the works’ dimensions, provenance, and the date they went missing. The project is done with the support of the museum.

“No one is exempt from the repercussions of colonialism and as long as issues of agency, ownership, and freedom continue to exist, society must act as a whole to repatriate artifacts that are simply not theirs,” says Ogboh who can’t wait until the artifacts are returned to Nigeria.

Léontine Meijer-van Mensch, the director of the Volkerkünde Museum, says it has been in touch with the Nigerian Embassy in Berlin, which submitted a formal letter in 2019 to German Chancellor Angela Merkel asking for the Benin Bronzes to be returned. The embassy connected the museum with Ogboh, a prominent artist in Germany who was included in the 2017 edition of Documenta, among other major exhibitions.

“We are grateful that the artist raises this awareness amongst all of us, including the museums and Dresden’s urban community, with his action and for naming so clearly what is at stake with these objects,” Meijer-van Mensch says.