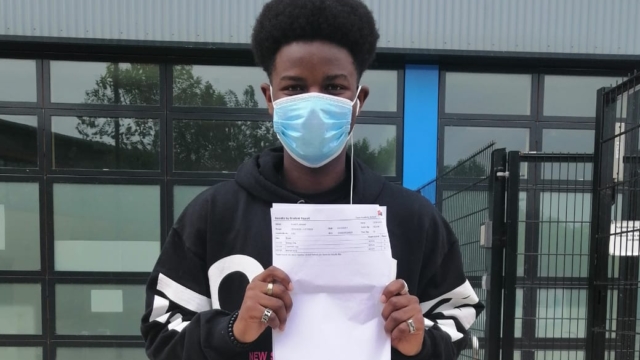 A student whose family came to the UK to flee terrorism in their home country of Nigeria is facing a fight to pursue his dream career as a scientist.

Israel Johnson, 18, secured an unconditional offer to study biomedical science at the University of Warwick but may be forced to drop out after discovering he is ineligible for funding to cover his tuition fees and accommodation and living costs over the four-year course.

The youngster, who has lived in the UK since he was eight years old, is classed as a home student by the university yet does not meet the criteria for the loans because he doesn’t have settled status.

Adult non-UK nationals without this status can qualify if they’ve lived here at least 20 years or at least half their life – it’s not clear why Israel has been refused.

The UK has given so much to me, I want to be able to give back and contribute as a scientist

The teenager, who lives in a deprived area of London and volunteers as a youth leader, says he wants to “break free from the restrictions of my background” has set up a GoFundMe to ask for help to fund the £9,250 a year fees.

“England is home to me,” he said. “The UK has given so much to me, I want to be able to give back and contribute as a scientist.”

A better life through education

Israel’s parents and their four children left Nasarawa town in central Nigeria in 2010, as Boko Haram was waging an armed rebellion against the government.

There’s been long-standing issues of religious violence between the country’s Muslim and Christian communities, and the insurgents’ aim is to establish an Islamic state in the region. Since the uprising in 2009, the terrorist group has killed tens of thousands and displaced 2.3 million from their homes.

Of these, 1.4 million are children, according to the United Nations Children’s Fund (UNICEF). Al Jazeera describes how traumatised youngsters – quoting a 13-year-old boy who witnessed his grandfather decapitated by the fighters – are motivated to enact revenge and become soldiers.

“It feels like a lifetime ago and I remember very little about Nigeria,” said Israel, who is aware his fate could have been very different if his family hadn’t left.

Indeed, the better life his parents – his former healthcare assistant father and phlebotomist mother – envisaged for their children was to grow up in a safe place and the chance to educate themselves and do something productive with their skills.

They are currently funding Israel’s sister Fellowship, 20, to study a child nursing degree. She also did not qualify for student finance, but the family cannot afford the heavy costs of supporting another child through university.

MORE READING!  VIDEO: If I quit music to work for my dad, I’d be a billionaire in dollars – Davido

Israel, who achieved As in chemistry and biology and a B in maths A-levels, said: “It was drummed into us that, being of African heritage, the only way we can better ourselves is through education.

“I don’t want to become an additional burden for my family who are working tirelessly to support my elder sister, which is already causing a massive financial strain on us.”

Desire to find cures for illnesses

Israel says he’s “passionate” about bioscience, which deals with the biological aspects of living organisms, and he hopes to play a role in furthering medical research.

“I got speaking to a scientist and lecturer from Kent and she was so passionate about her job and helping deliver new research projects that were making advances in medicine and changing people’s lives and she inspired me.

“I thought, that’s exactly what I want to do. I want to dedicate my life to bioscience and I would love to be able to help provide better diagnoses and treatment and potentially cures for diseases.”

Israel will need £37,000 in total for tuition fees, and going by students’ average monthly spend, he will require around the same figure over four years for accommodation and living costs.

“I hadn’t heard anything back from the Students Loan Company, I was presuming it would be OK. But then I logged on this week and saw I was ineligible. I’m now in a position of uncertainty and I may be forced to withdraw from university.”

I will never allow my background to define me but instead, it uses it to motivate me to overcome this limitation

Israel lives in Enfield in the north of the capital, the 9th most deprived London borough out of a total of 32.

“There’s been a rise in knife crime involving youths where I live and I attended a school where the proportion of students going into higher education is low and the performance of students has been below national average.

“I will never allow my background to define me but instead it use it to motivate me to overcome this limitation.”

Israel volunteers as a youth leader for his local church’s Boys Brigade group. “My family have been long involved in the church and the people there have been great mentors to me growing up. That’s why I now help and guide children, to give something back.”