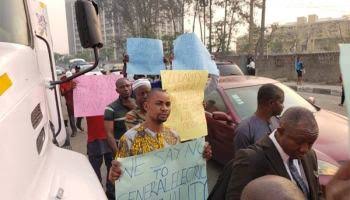 Members of the Nigeria Union of Petroleum and Natural Gas (NUPENG), on Tuesday suspended its one-day picketing of the headquarters of General Electric (GE), following the intervention of the Minister of Labour and Employment, Dr Chris Ngige.

Newsmen report that NUPENG in solidarity with the Petroleum and Natural Gas Senior Staff Association of Nigeria (PENGASSAN), on Monday took to the streets of Lagos in protest against General Electric.

They were dressed in red, chanting songs, and carrying placards with various inscriptions such as “GE must pay ARCO to pay our members”.

Aiyedun hinted that the leadership of NUPENG, GE management and officials of the Labour ministry, would be meeting next Monday to resolve the lingering issues.

He, however, added that if after the meeting the matter was not resolved, the union might resume its action.

“But from today, no union member will be coming to picket the company again, ” Aiyedun said.