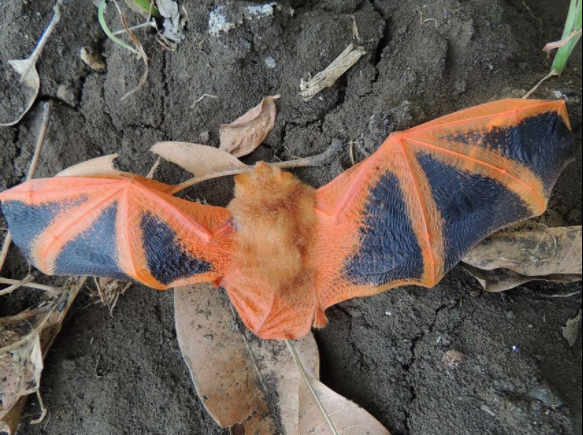 Scientists have discovered a new species of bat that have bright orange fur and black wings.

The researchers describe the species, which they name Myotis nimbaenis, in the journal of American Museum Novitates.

Jon Flanders, the director of endangered species intervention at Bat Conservation International, was leading an expedition with eight other researchers in the Nimba Mountains in Guinea when they found the orange bat. Many bats live in the mountains’ abandoned mineshafts that are now unstable and unsafe to enter, so researchers tossed nets at the entrances to trap bats while they flew, reports Darryl Fears for the Washington Post. One night in January 2018, a brightly coloured bat stood out among its dark-furred neighbours also caught in the net.

“The color is just phenomenal,” says Flanders to the Post. “Its wings are black with these orange fingers. There aren’t a lot orange bats in the world. I don’t tend to work with that many brightly colored bats. It’s definitely an unusual one for me.”

The team concluded that the new species of bat is at least five per cent different than the closest-related species, reports the Times.

Next, the scientists hope to study more about M. nimbaenis’ ecology—where it lives, what it eats, and what it needs in a habitat.