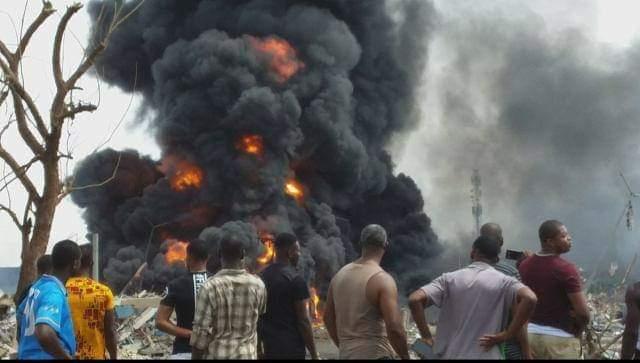 The National Emergency Management Agency (NEMA) on Thursday distributed relief materials to victims of dynamite explosion that occurred along Akure-Owo road on March 28.

The Newsmen reports that a dynamite-laden truck had exploded at Eleyowo, along Akure-Owo road, causing damages to buildings and other structures.

No life was lost to the explosion.

Mr. Muhammad Muhammed, Director General of NEMA, while flagging off the distribution in Akure, said the token from the Federal Government was to ameliorate the losses suffered by persons affected by the disaster.

Muhammed, represented by Mr. Olusegun Afolayan, Ekiti Head of Operations, said the gesture was the right thing to do after assessing the effect of the explosion on both the human and structures around the affected areas.

“I wish to use this medium to express our unreserved sympathy to the communities and Ondo State Government over the unfortunate dynamite explosion disaster that affected several people, their livelihoods, and causing damage to property worth hundreds of millions of naira.

“These relief materials are a token from the Federal Government to ameliorate the sufferings incurred by the disaster on affected persons.

“I implore the beneficiaries to use the items judiciously to lend credence to the federal government’s effort in bringing succor to the affected persons in the country.

“Let me remind us that while disaster does not just occur in a vacuum, whenever it strikes, our local communities and environment which remains the most valued possession becomes seriously affected,” he said.

Gov. Oluwarotimi Akeredolu of Ondo State, who lauded the NEMA management, said it was gratifying that explosion occurred during COVID-19 lockdown when mass gathering in public places like schools and church vigils were prohibited.

Akeredolu, represented by the Secretary to the State Government (SSG), Mr. Tayo Oluwatuyi, said the state government would soon complement the kind gesture of NEMA to the affected victims.

The governor confirmed that the company transporting the explosives, Nigachem Nigeria Limited, had settled claims by the victims.

“Based on the reports of the valuations and assessment carried out by the valuation consultants to the insurance company on behalf of Nigachem Nigeria Limited, the owner of the explosives that caused the unfortunate incident.

“I am happy to report that just last week, the company on their own has committed enormous resources to settle all claims from the victims,” he said.

Also, Mr. Femi Obideyi, the Secretary of the State Emergency Management Agency (ODSEMA), thanked NEMA for always coming to the rescue of disaster victims in the state.

Newsmen reports that some of the items distributed include building materials such as nails, roofing sheets, and plywoods as well as food items like rice, beans, seasonings, palm oil, among others.