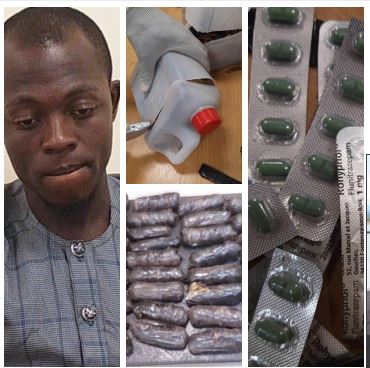 The National Drug Law Enforcement Agency on Sunday announced that it has nabbed three suspects in connection with multiple drug bust-ups including cocaine, Rohypnol (Flunitrazepam) among other substances.

This is just as the agency stated that it intercepted a 4.3kg of skunk imported from Canada.

The package, which came aboard Ethiopian Airline, was concealed in nine packs of cereals.

This was contained in a statement by the Director of Media & Advocacy, Femi Babafemi on Sunday,

The substances were detected during the outward clearance of cargo heading to Dubai.

In a related development, an Uber driver, Lawal Tunde Rasheed was earlier arrested on 8 June in connection with the seizure of a cocaine consignment.

He was, however, let off the hook following his cooperation that led to the arrest of the real owner of the drug, Mr. Egbo Emmanuel Maduka, who in his statement accepted ownership of the consignment and absolved Lawal of any complicity.

While commending officers and men of the MMIA Command of the Agency for the series of seizures and arrests in the past week, Gen. Marwa asked them not to rest on their oars, adding that “we must all remain fully prepared and proactive at all times if we have to battle this scourge to a standstill.”