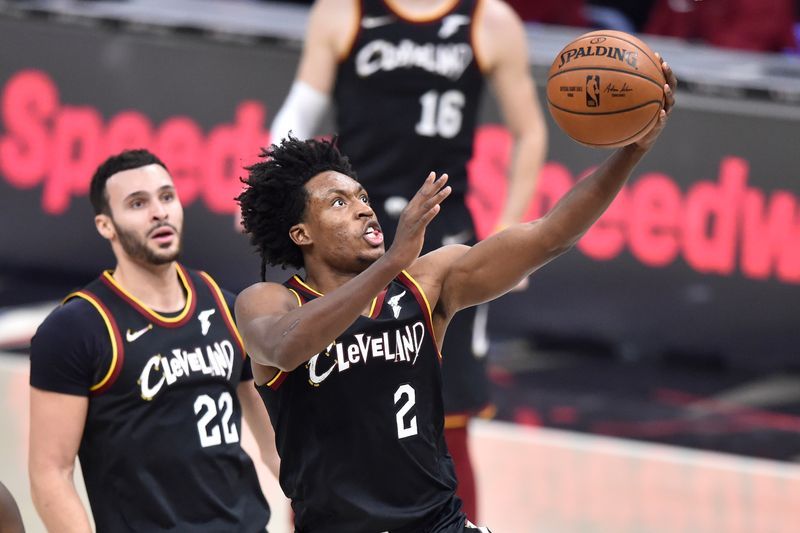 Collin Sexton hit the game-tying 3-pointer with 1.2 seconds left in the first overtime and scored 15 of his career-high 42 points in the second overtime as the host Cleveland Cavaliers outlasted the Brooklyn Nets for a 147-135 victory on Wednesday night.

Thanks largely to Sexton’s efforts, Cleveland overcame big nights in the debut of Brooklyn’s star trio of Kevin Durant, Kyrie Irving and James Harden, who each played the final 18-plus minutes.

Durant led the Nets with 38 points but missed a potential game-winning shot at the buzzer in the first overtime.

He also put up 12 rebounds and eight assists. Irving added 37 points in his first game back from a two-week absence due to personal reasons along with health and safety protocols.

Harden posted his second triple-double in three games as a Net with 21 points, 12 assists and 10 rebounds.

Capela became the first Atlanta player with at least 25 points and 25 rebounds since Dikembe Mutombo in 1999.

Atlanta got 38 points and 10 assists from Trae Young and 31 points and 11 rebounds from John Collins and defeated the Pistons for the second time.

Joel Embiid scored 42 points and grabbed 10 rebounds to lift host Philadelphia past rival Boston, who played without Jayson Tatum, who is recovering from COVID-19.

Embiid shot 12 of 19 from the field and 17 of 21 from the free-throw line for his second 40-point effort this season — both in the past three games. Tobias Harris added 22 points for the Sixers, who have won eight of nine at home.

Jaylen Brown led the Celtics with 26 points while Marcus Smart added a season-high 25.

Daniel Theis had 23 points and 10 rebounds, and Kemba Walker contributed 19 points in just 22 minutes in his second game back from a knee injury.

Kristaps Porzingis collected 27 points and 13 rebounds while Trey Burke added 22 points off the bench to lift Dallas over Indiana in Indianapolis.

Porzingis made 12 of 15 attempts from the floor and Burke sank 9 of 16 shots, including four from 3-point range.

Tim Hardaway Jr. finished with 19 points, two days after misfiring on all 12 attempts during a scoreless performance in Dallas’ 116-93 loss to the Toronto Raptors.

Luka Doncic recorded his 30th career triple-double with 13 points, 12 rebounds and 12 assists for the Mavericks, who snapped a season-high, three-game losing streak.

Malcolm Brogdon scored 26 points while Domantas Sabonis had 25 points and 10 rebounds for the Pacers.

Kendrick Nunn scored a season-best 28 points off the bench and grabbed eight rebounds and Miami defeated Toronto at the Raptors’ temporary home in Tampa.

It was the first time the Heat have won two in a row this season, and it ended the Raptors’ winning streak at three games. The teams play again on Friday at Tampa.

Fred VanVleet had 24 points and nine assists for the Raptors while OG Anunoby and Pascal Siakam each added 18 points.

Cole Anthony’s 3-pointer at the buzzer capped Orlando’s rally in a win over Minnesota at Minneapolis.

The Magic came in losers of six straight and appeared headed for a seventh consecutive loss as their field-goal percentage languished in the 30s for much of the night.

Rookie James Wiseman used seven dunks as a foundation for a season-best 20 points and Stephen Curry added a game-high 26 as Golden State ran away from San Antonio in San Francisco.

Riding the momentum of a win in Los Angeles over the defending champion Lakers on Monday, the Warriors led by as many as 22 points in the first half before ending a three-game losing streak against the Spurs.

Dejounte Murray had 22 points to pace San Antonio, which was completing a two-game trip that began with a win at Portland.

Deandre Ayton posted a double-double while Devin Booker added 24 points as visiting Phoenix staved off a late rally from Houston.

The Suns led by as many as 20 points in the third quarter before the Rockets rallied, eventually cutting the deficit to 103-101 with 1:38 remaining before Phoenix held on.

Ayton led Phoenix with 26 points, 17 rebounds and five blocks while Booker shot 10 of 18 from the floor. Victor Oladipo and Eric Gordon scored 22 points apiece for the Rockets, who have lost five of six.

Related Topics:CavsdebutNBA roundup
Up Next