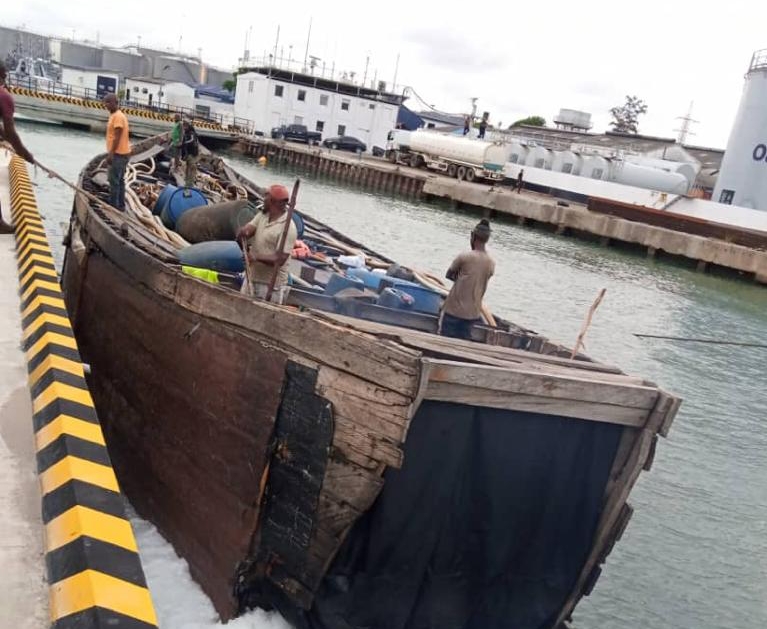 The Nigerian Navy has paraded seven suspected smugglers who were allegedly caught transporting over 210,000 litres of adulterated diesel in Rivers.
Naval forces said the diesel was stored in four tanker trucks and another unspecified quantity of diesel believed to be stolen were kept inside hundreds of sac bags and moved to different locations in the state.
Cdr. Umar Sidi, Base Operations Officer, Nigerian Navy Ship (NNS) Pathfinder, Port Harcourt, spoke during the handover of six trucks and seven suspects to the Economic and Financial Crimes Commission (EFCC) on Thursday.
According to him, the suspects were caught smuggling the adulterated diesel for sale to unsuspecting members of the public before their arrest.
“The first seizure by our patrol team was made on June 17, at about 2:30 p.m. following credible intelligence to the activities of illegal bunkerers at Magcobar area in the state.
“After receiving intelligence, our team mobilised and intercepted two heavy duty trucks loaded with several bags containing an unspecified quantity of suspected illegally refined diesel.
“One suspect was arrested at the scene of the crime,” he said.
Sidi said that troops also intercepted and arrested two other tanker trucks around the Tourist Beach area in Borokiri and Rumuokuta Junction in Port Harcourt.
“Three suspects believed to be connected to either the illegal products or the trucks were arrested alongside the trucks on the scene.
“Similarly, on June 29, NNS Pathfinder patrol team also seized two additional tankers and arrested three suspects around the Tourist Beach area in Borokiri.
“The suspects were detained on suspicion of unlawful bunkering of petroleum products suspected to be diesel,” he added.
The naval officer said the seizures and arrests were made possible by the renewed strategies put in place to rid the country of crude oil theft and illegal refining of petroleum products.
He said the naval base was determined to carry out its charge of clearing all forms of crimes and criminality in creeks and waterways in the state.
Receiving the suspects and exhibits, Mr Albert Kukah, Assistant Superintendent of EFCC, lauded the navy for the synergy that existed between the two security outfits.
He promised speedy investigation and prosecution of the suspects in court if found culpable of the crime.