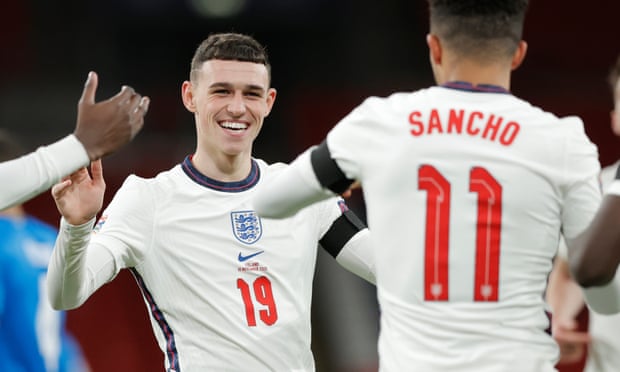 Gareth Southgate’s men bounced back from the Belgium heartbreak that eliminated the from this year’s Nations League finals with the comfortable win against ten-man Iceland at Wembley.

Captain Harry Kane turned provider four minutes later as he set up Chelsea youngster, Mason Mount who made it 2-0 for the home side.

The Icelanders were reduced to 10-men in the 54th minute when Birkir Már Sævarsson picked up a second yellow card for a foul on Arsenal youngster, Bukayo Saka.

Foden ensured he got on the scoresheet twice in the space of four minutes to put the match to bed with two fine finishes in the 80th and 84th minutes.

Speaking after the game, coach Southgate said: “For the last three days their mentality has been outstanding. Whenever you play for England there is something to play for. We’re trying to build and improve all the time. Our football was good to watch and for the young ones to get the goals was special.

“Most of our squad will peak in three to five years time. We think it’s worth investing the time in them. We’re still working on the balance of profiles of players for the system.

“Our attacking play was good, right from the back they built so well. [Some young players] are still growing physically, they’re still light. Wonderful technicians but they can get overpowered and you play Portugal or France and it’s land of the giants and you have to cope with that.

They’re going to have another five months with their clubs where they’ll play big games and learn even more. I’m really pleased for Foden, he’s such an exciting player.”

Nations League: Netherlands fight back to secure 2-1 win over Poland