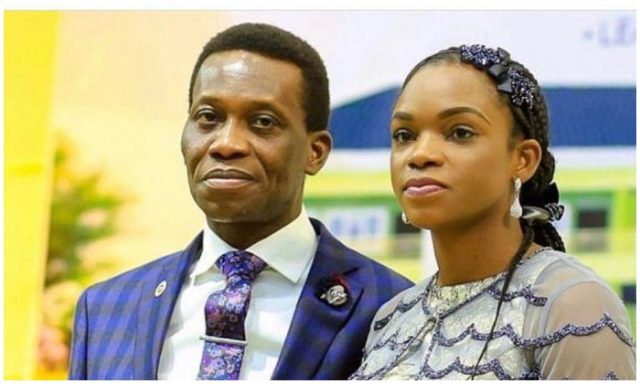 Temiloluwa, spouse of the late Pastor Dare Adeboye on Monday disclosed that she had no cause to mourn her hubby knowing that he is in a Heaven.

She described the late cleric as a strong character who was never afraid of death.

The death of Dare, the third son of the General Overseer of the Redeemed Christian Church of God, Pastor Enoch Adeboye reverberated across the nation last week.

The 42-year-old was reported to have died in his sleep on Tuesday in Eket, Akwa Ibom State, where he was the Assistant Pastor in charge of Region (Youth) 35 before his death.

His wife, Temiloluwa, however disclosed told the audience at the Evening of Worship and Tribute, which held at the RCCG, House Of Favour, Redemption Camp that her husband has finished running his race.

According to The PUNCH, Temiloluwa told her that if he died, he knew he was fulfilled because he had done what the Lord asked him to do.

“Pastor Dare, my husband was a wonderful person. He was amazing in every sense of the way. I do not mourn him at all; I weep because he left me. He slept, he did not die. And I know, I am sure, because on the resurrection morning, he will rise again and we will see him in glory.

“He said if I die today, I know I am fulfilled, I have done what the Lord has asked me to do, he was not afraid of death. He was not afraid. It is not a matter of time but how well and he lived a good life, he lived to the glory of God. He lived, he served God. His life was dedicated to Christ and that is why I am sure that he is heaven.