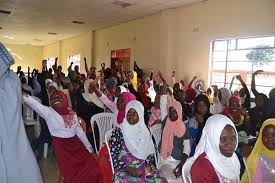 The Yobe chapter of the Muslim Sisters Organisation of Nigeria (MSO) an NGO, in collaboration with United Nation Women, has embarked on advocacy and sensitization to end Gender-Based Violence (GBV) in the state.

The Amira (Leader) MSO in Yobe, Hajiya Magaji Chellumi, made this known on Tuesday at a preparatory meeting on integration of gender-based awareness and prevention of discrimination in Damaturu.

“In our advocacy visit to these local government areas, we met and enlightened traditional rulers, religious leaders, and other stakeholders in order to end the ugly act in our society,” she said.

Chellumi urged parents and guardians to always be vigilant with respect to their wards especially their friends, whereabouts, and to report any suspected case of GBV to the authorities.

In his remarks, Yusuf Kagara, the GBV officer said that two focal officers were selected from each senatorial district of the state among other MSO local government staff to take the project to the grassroots.

Kagara enjoined all the project participants to remain determined and good ambassadors in their respective communities.