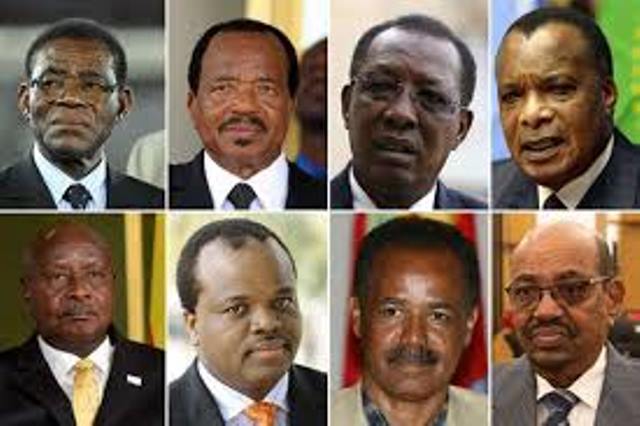 The sit-tight/tenure elongation syndrome particular to African politics has been traced to the history of leadership in Africa right from the era of independence.

One of the major hallmarks of democracy is the successful transfer of leadership from one government to another, a process that is marked with the conduct of credible elections.

Post-independence politics of African countries has been dominated by phenomenal African Heads of state and government who had acceded office by election or coup d‟état.

WUZUPNIGERIA brings you a list of such leaders with the sit-tight syndrome.

Top on the list is the newly sworn-in Ugandan President, Yoweri Kaguta Museveni has served as the country’s President since 1986.

José Eduardo dos Santos is an Angolan politician who served as President of Angola from 1979 to 2017.

In 1979, he seized power from his uncle Francisco Macias Nguema, who was the leader at independence and whose rule prompted a mass exodus and thousands of deaths.

Paul Biya, 88, has been in power since 1982.  After the country’s parliament in April 2008 passed a controversial amendment to the constitution enabling Biya to run for a third term.

The octogenarian won a new seven-year term in the October 2011 election, in a vote that observers said was marred by irregularities.

Idriss Déby Itno was head of the ruling Patriotic Salvation Movement, he was a Chadian politician and military officer.

He was the president of Chad from 1990 until his death at the hands of militant forces when commanding troops on the front in 2021.

Denis Sassou Nguesso, 78, extended his 32 years in power after he won the 2016 presidential elections. The long-serving leader came to power in 1997.

The sixth and current President of Rwanda, Paul Kagame, assumed office in 2000 when his predecessor, Pasteur Bizimungu, resigned.

The country’s constitution was amended in the 2015 referendum to allow Kagame to run for a third term of seven years at the end of his 2017 tenure.

The newly amended constitution reduced a presidential term from seven to five years but that will come into effect when Kagame’s third term tenure of seven years comes to an end.

This enables him to run for another two terms of 5-years each under the amended constitution, making it possible for the 64-year-old leader to rule until 2034.

56-year-old Pierre Nkurunziza became the first president to be chosen in democratic elections since the start of Burundi’s civil war in 1994.

His re-election to a controversial third term in 2015 followed a disputed election boycotted by the opposition.

Burundi’s constitution limits presidents to a maximum of two terms in office, but the constitutional court ruled in favour of his argument that his first term does not count, as he was elected by parliament and not by the entire electorate, and was thus eligible to stand again.

Faure Essozimna Gnassingbé Eyadéma is the President of Togo. He has been in power since 2005. His father, Gnassingbé Eyadéma, had ruled the small country for 38 years before he assumed office after his father’s death.