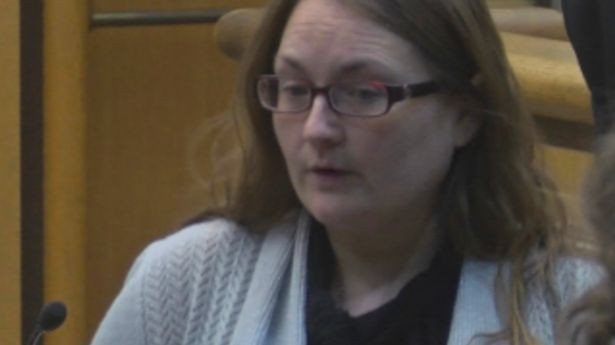 A mum, Amy Brown who was celebrating her 36th birthday with her fiancé Brandon Fayard, has killed her friend Amanda Hill, 35, after walked in on both of them in bed together.

According to a report by the Mirror Online published Sunday, 2nd August, Amy and her friends were celebrating her birthday in Prosser, Washington State back on February 9, 2018, when her fiance, Brandon told her he was going to bed, and then not long after, her friend Amanda went in to use the bathroom.

After 20 minutes passed Amy Brown (pictured below) went in to see why her friend had taken too long only to find her fiance and friend in bed.

Before the unfaithful day, Brown and Brandon ran a business together and also took care of her two boys from a previous relationship and three sons from Brandon.

Meanwhile Brown had met her friend Amanda years earlier. Amanda who was also a mum quickly bonded with Amy Brown and they soon became good friends.

According to the Mirror Online, after Brown caught her fiance and friend in bed together, an argument ensued which made Brown storm off to smoke and drink outside the house.

MORE READING!  BBNaija: Everyone should wash their own pant - DJ Cuppy

As Brown was smoking downstairs, her friend, Amanda went to meet her. Not long afterwards, at around 12.45 am, two loud gunshots could be heard.  A horrified Brandon ran outside and found Brown cradling a bleeding Amanda in her arms.

Amanda had been shot twice in the torso. Brandon called 911 but after frantic work by the emergency services, Amanda was declared dead.

During police investigations, Brown admitted that she’d shot and killed her friend but claimed it had been for self-defence because Amanda had attacked her.

Brown described how she had found her friend and fiancé in bed together and that after yelling and swearing at them, she’d gone outside for a smoke and more drink.

Brown then said as she was smoking, Amanda attacked her from behind.

‘She knocked me on my face, and I turned around and she was trying to, like, choke me,’ Brown was recorded saying.

She described Amanda having her hands on her face and neck. ‘I felt like she was trying to choke me,’ she continued.

According to Brown, she’d managed to break free and scramble over to her parked Cadillac Escalade car where she grabbed a .38-calibre revolver that was stashed in the door.

‘I grabbed it and I pulled it out and I was like, “Get off me,” and she wouldn’t get off of me so I fired,’ Brown admitted.

Brown insisted that when she realised what she’d done, she’d immediately put pressure on the wound and screamed for Brandon to call 911.

‘And I kept the pressure on until police pulled me off of her,’ Brown said.

Brown insisted that she had fired in self-defence but when asked whether she thought Amanda was going to harm her, or whether she felt like her life was in danger, she admitted she didn’t feel like it was.

Upon her revelations police asked her why did she deliberately get a gun, if she didn’t feel as though Amanda was a threat to her.

Amanda’s devastated family were left with a sad feeling that she had been killed and at the hands of a woman who was supposed to be her friend.

At the trial this year, prosecutors charged her (pictured in court below) with murder saying that Brown had flown into a jealous rage when she found her fiancé and friend in bed together and had shot Amanda twice in the torso in an act of anger.

They accused Brown of Murder because she admitted she didn’t feel like her life was in danger when she reached for a gun and shot her friend twice.

Amanda meanwhile continued to reiterate that she had retaliated in self-defence.

In the end, the jury deliberated for less than three hours and in March 2020  Brown, now 38, was found guilty of second-degree murder.
In June, she faced her sentencing.

According to her lawyers, Brown’s act that night hadn’t been planned and until then, she had been a law-abiding citizen.
The judge has sentenced Brown to 15 years in prison.

Our houseboy killed my wife, almost killed me too, widower recounts ordeal

Father of three commits suicide after strangling sister in Enugu