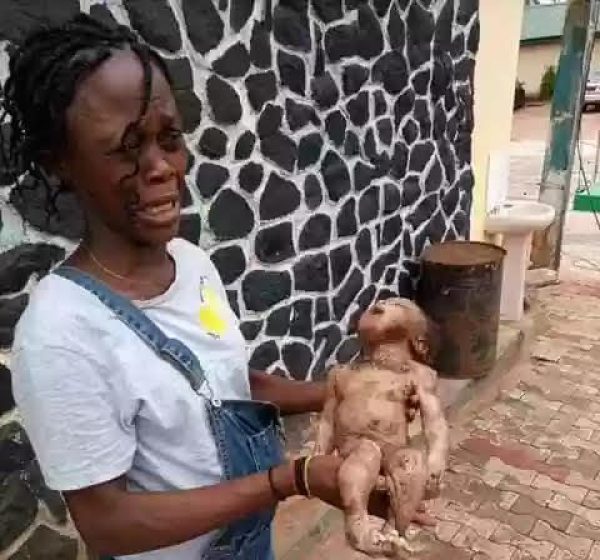 Many women are known to crave having a male child for reasons best known to them but such is not the case with 30-year-old Franca Udokwu.

Franca Udokwu who hails from Ogidi, in the Idemili Local Government Area of Anambra State on Saturday allegedly threw her newborn baby boy into the latrine.

A resident, who spoke with our correspondent on condition of anonymity, said she had been complaining to some people that she did not like the sex of her baby.

“I learnt she went for a scan some weeks ago and was told that her baby was a boy; whereas, she was expecting a baby girl.

“Those close to her said she had been angry about that. I won’t know whether that could be the reason for her action,” the resident stated.

The Police Public Relations Officer in the state, Haruna Mohammed, confirmed the incident, saying that the baby was recovered dead from the toilet.

MORE READING!  My mother was mocked for having two children- Lepacious Bose

“On Saturday, around 8.30 am, operatives attached to Ogidi Division arrested one Franca Udokwu, 30, of Obuba Obofia Nkpor Community in Idemili North LGA of Anambra State. The suspect allegedly gave birth to a baby boy and dumped the child inside a pit toilet inside her house.

“Upon interrogation, the suspect led police detectives to the scene of the crime where the baby was recovered and taken to Iyi-Enu Mission Hospital for medical attention but was confirmed dead on arrival by a medical doctor.”

Meanwhile, the Federal Capital Territory Police Command on Friday rescued two children allegedly locked in a toilet and subjected to inhuman treatment by their guardian who lived on the second floor of a two-storey building in FCDA Quarters, Garki, Abuja.

MORE READING!  I baby-sat Davido when he was young, Kemi Olunloyo reveals

One of the children, Wisdom, nine years, who managed to escape through the window of the apartment, raised the alarm that led to the rescue of the second victim, Nwoga, also nine-years-old.

The police spokesman, DSP Anjuguri Manzah, disclosed in a statement on Saturday, that Nwoga was rescued from the apartment by operatives from Garki Police Division and Federal Fire Service.

“The guardian, Mrs Loveth Ilobi, was reported to have been subjecting the children to undue hardship and inhuman treatment.

Girl, three, dies after falling into well in Lagos