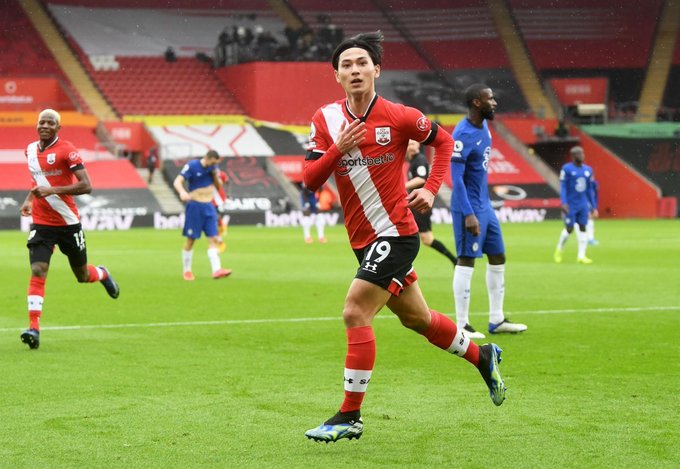 Liverpool loanee, Takumi Minamino got on the scoresheet as Southampton hold Chelsea to a 1-1 draw, ending a six-game losing streak.

The Blues suffered a setback in their attempt to go a point behind Manchester United and Leicester City who have a game at hand and could drop out of the top four at the end of game week 25.

Minanmino put the Saints ahead in the 33rd minute after beating Ceasar Azpilicueta and Mendy by fooling them with a fake shot before sliding the ball into an open net.

Mount stepped up to convert the spot-kick in the 54th minute as Chelsea pulled one back but the team failed to secure a comeback as they shared the spoils at the Saint Mary’s Stadium.

Jannik Vestergaard struck the bar, while Reece James blazed an effort over as neither side could produce the quality to find a winner.

Since Thomas Tuchel’s first game in charge of Chelsea on January 27th, they have allowed their opponents just 1.7 shots on target per Premier League game on average (10 faced in 6 matches) – the lowest ratio of any side in the competition in this time. Control. – OptaJoe
MORE READING!  Olympics: Team Nigeria's Edem crashes out of table tennis women’s singles
Related Topics:ChelseaSouthamptonTakumi Minamino
Up Next