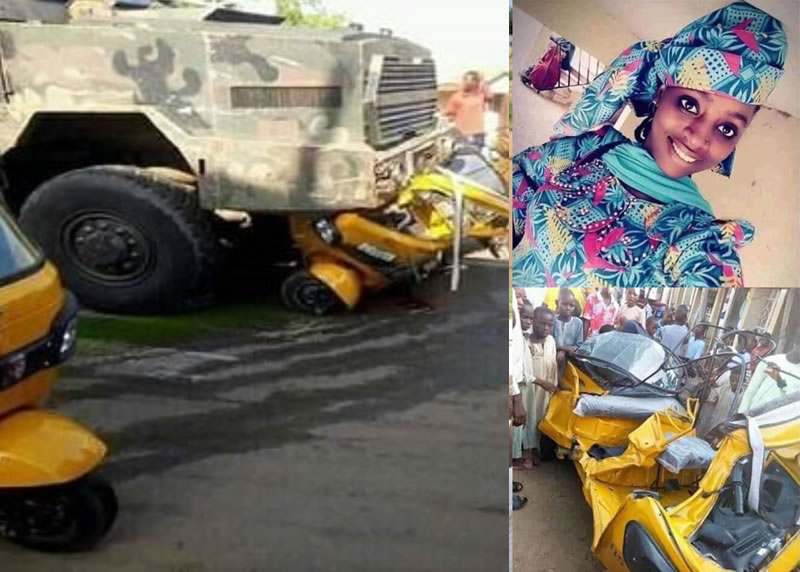 A pre-ND student of the Federal Polytechnic, Damaturu, Yobe State, Hussaina Baffa Bello, and a toddler were on Sunday crushed to death by a military gun truck.

WuzupNigeria gathered that the deceased were in a tricycle, popularly called Keke NAPEP, when the military vehicle collided with the tricycle.

Findings revealed that the accident occurred at a junction along Gashua Road.

The accident drew reactions from residents and civil society organisations in the state.

Executive Director of CSOs in the state Abubakar Baba Shehu said the position of the CSOs will be made public after investigation.

The state government and the military have visited the family of the deceased to condole with them.

Governor Mai Mala Buni, in a statement by the Director-General, Press Affairs, Abdullahi Bego, said that the Brigade Commander 27 Task Force Brigade of Nigeria Army and the Commanding Officer 233 Tank Battalion with officials of the state government have visited the family of the deceased.

The statement also said that Governor Buni has directed the acting Secretary to the State Government to liaise with the military and commence a full investigation into the matter.

Governor Buni also directed that free medical access be given those wounded and receiving treatment at the hospital.

“His Excellency Governor Mai Mala Buni has been briefed about an incident in Damaturu yesterday in which a KEKE NAPEP rider with passengers was crushed by a military vehicle in an accident which claimed the lives of two persons.

“Already, the Brigade Commander 27 Task Force Brigade, the Commanding Officer 233 Tank Battalion and officials of the State Government have visited and commiserated with the families of the victims.

“His Excellency has learnt that one of the victims, Hussaina Baffa Bello was a pre-ND student of the Federal polytechnic Damaturu while the other fatality was a toddler.

“Governor Buni’s thoughts, sympathies and prayers are with the families of those who lost their lives and with the victims who sustained injuries.

“The governor prays Almighty Allah (SWT) to grant repose to the souls of those who died, fast recovery to those who sustained injuries and fortitude to bear the loss for families of the victims.

“His Excellency Governor Buni has directed the office of the acting Secretary to the State Government to liaise with the military in order to have a full investigation and ascertain how the accident happened and how such could be avoided in the future.

“The governor has also directed the State Ministry of Health and the Hospitals Management Board to ensure that those who sustained injuries are given access to free medical care”.