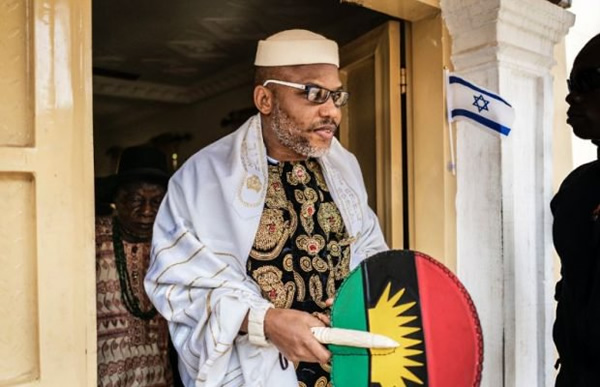 THE leadership of the Indigenous People of Biafra has alleged the military laid siege to Isiama Afaraukwu community in the Umuahia North Local Government Area of Abia State, hometown of its leader, Nnamdi Kanu, on Monday morning.

The secessionist group alleged that soldiers entered into the area in search of innocent citizens to kill, maintaining that they were under a live Closed-Circuit Television surveillance to expose any possible mayhem that might be meted on the people.

Kanu stated this in a statement he personally signed, which was made available to journalists through its Director of Media and Publicity, Emma Powerful, on Monday.

A viral video is currently trending on the social media, wherein the army is seen patrolling the area with its Hilux vans and armoured vehicles.

According to the proscribed group, military aid by the United States of America, United Kingdom, amongst others, to Nigeria, was indirectly used to engender terrorism and Islamic conquest of Christians in the country.

“Early this morning of the 12th of October 2020, the terrorist Janjaweed Army of the Mohammedian Emirates, have once again commenced their siege on Isiama-Afaraukwu, my village, in search of innocent citizens to kill.

“They are under constant live CCTV surveillance; therefore, any terrorist attack on my village by this band of uniformed terrorists will be captured and broadcast live for the world to see.

“The world must stop supporting Fulani terrorists in Nigeria. My village is not Sambisa forest.”

However, several calls to the Army Director of Public Relations, 82 Division Enugu, Col. Aliyu Yusuf, were not answered.

He had yet to respond to three text messages sent to his mobile line on the matter as of the time of filing this report.

Related Topics:IPOBNnamdi Kanu
Up Next