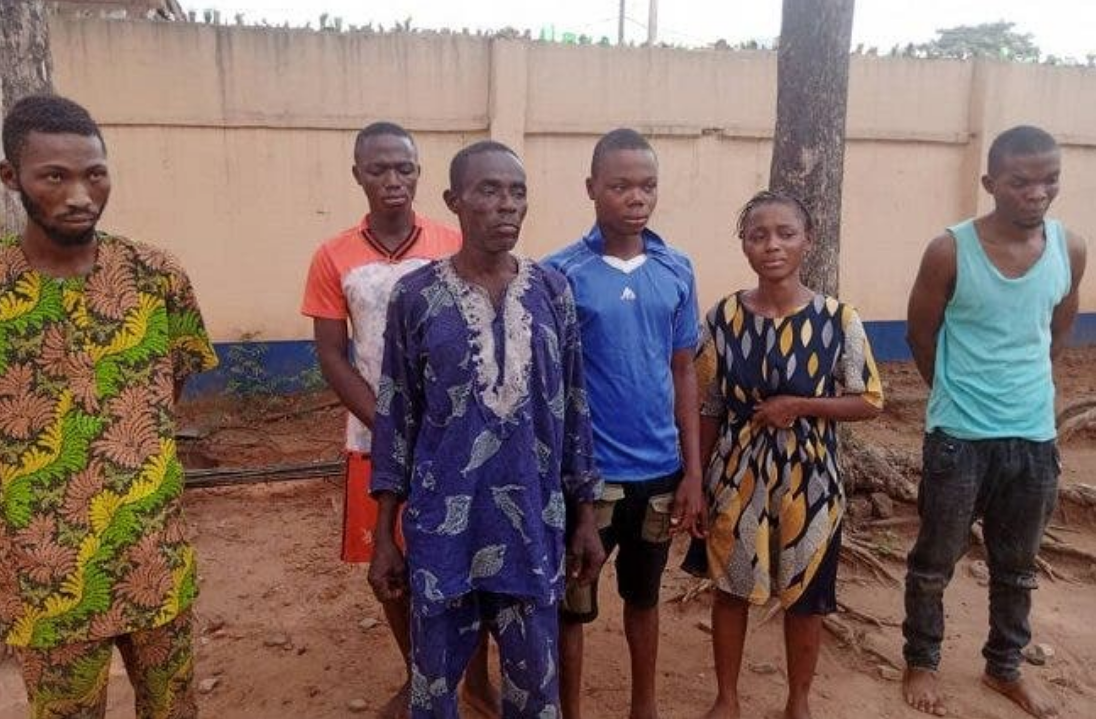 The Ogun State Police Command has arrested a family of seven, the Okparas, over their alleged involvement in the kidnapping of no fewer than eight persons for ransom.

Arrested alongside the family were Christian Ishaha and Emmanuel Joseph.

Oweniwe, according to Oyeyemi, owns farmland at the Aiyepe-Ijebu road which was being used as the kidnapping ground. He added that Oweniwe’s younger brothers – Godwin, Godspower and Mathew – were the armed squad of the syndicate.

The police said that while Oweniwe’s three younger brothers were the armed squad of the syndicate, his children – Samson, Bright and Eze Okpara – were the ones spying on their targeted victims.

“In compliance with the CP’s directive, the DPO of Sagamu division CSP Okiki Agunbiade and his crack detectives with the support of Sagamu security council under Akarigbo of Remo land embarked on intelligence and technical based investigation, which led to the arrest of one Oweniwe Okpara from Delta state and three of his children namely; Samson Okpara, Bright Okpara and Eze Okpara as well as one Christian Ishaha who accommodated them.

“They were all arrested in Ajaka area of Sagamu for their roles in the kidnap of 8 persons at different times in Sagamu and other areas.

“In the course of investigation, it was discovered that three other members of the family constituting the criminal gang namely; Godwin Okpara, Godspower Okpara and Mathew Okpara are the armed squad of the syndicate, while Samson, Bright and Eze Okpara were the ones spying on their targeted victims.

“One Emmanuel Joseph, a native of Ebele in Edo State was later recruited into the fold, having confronted their sister, Eze Okpara to tell him the source of money they used to count every day. They subsequently opened up to him that they are into kidnapping business and he also joined them.

“Having heard about the arrest of their father and their three siblings, Godwin, Godspower and Mathew Okpara took to flight and ran to Delta state with their operational car and their arms where they were subsequently apprehended by the Delta state police command after carrying out another kidnapping there”.

“Their camp located at a forest in Ayepe-Ijebu where their father used to farm before converting it to a camp was located by policemen led by the DPO Sagamu and subsequently destroyed. Items recovered at the camp include; three expended cartridges, cooking gas, tarpaulin, cooking utensils, women bags and twine.”

Among those allegedly kidnapped by the family was a 53-year electronics dealer, Okechukwu Onwubiko, who was abducted on 4 June 2020 and released seven days after his family paid N5 million ransom.

Also kidnapped was a RCCG Pastor, Omotayo Sobowale, who runs a POS business, he said was kidnapped on the 16th of June, 2020. He parted with N1m and regained his freedom after 24 hours. He also identified one of the suspects as having come looking for a job in his company.

Oyeyemi who said the State Commissioner of Police, Edward Ajogun, was satisfied with the apprehension of the syndicate, called for the cooperation of the public in providing adequate security in the state.