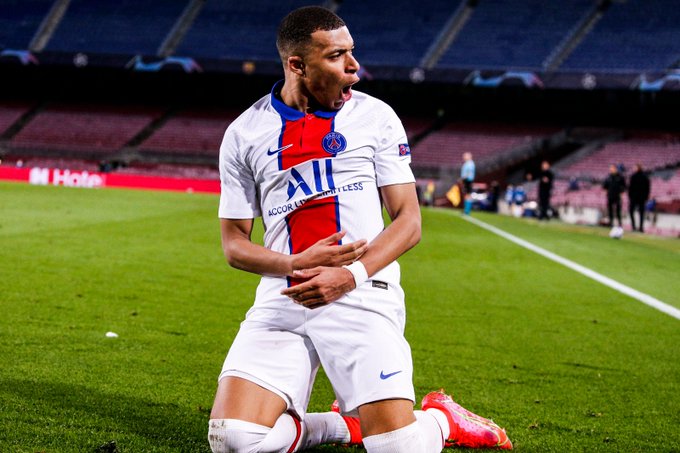 Kylian Mbappe scored a hattrick as Paris Saint Germain wrecked Spanish giants, Barcelona 4-1 at the Camp Nou in the first leg of the Champions League Round of 16.

The Catalans took the lead in first-half through captain Lionel Messi’s penalty after the referee gave the spot-kick to the home side following a foul on Frenkie De Jong in the box by Layvin Kurzawa.

The lead only lasted for five minutes as Mbappe scored his first of the night (32′) to keep his side in the game with superb strike beyond the reach of Andre Ter Stergen, thanks to a flick from Marco Veratti.

The Frenchman gave PSG the lead for the first time in the 65th minute after a blocked shot from a counter play found its way to his feet and he made no mistake as he slots it into the net to make it 2-0.

Mauricio Pochettino’s men made it 3-1 five minutes later through a Moise Kean header from a well-taken setpiece from Leonardo Paredes.

Ronald Koeman’s team were tore to shreds by the mastery of Mbappe five minutes to the end of regular time when Barcelona found themselves in a three versus two situation at the back.

Julian Draxler draws in the Barca defenders before laying off to Mbappe who let nothing get in the way of his hattrick.

Paris Saint-Germain became just the second French side to beat Barcelona at Camp Nou after Metz also won 4-1 in the 1984-85 Cup Winners’ Cup. French sides were winless in 10 subsequent visits (D2 L8).
Barca head to the Parc de France stadium in Paris with a huge mountain to climb as their semi-final qualification chances hang on a thread.
Related Topics:BarcelonaChampions LeagueFeaturedPSG
Up Next