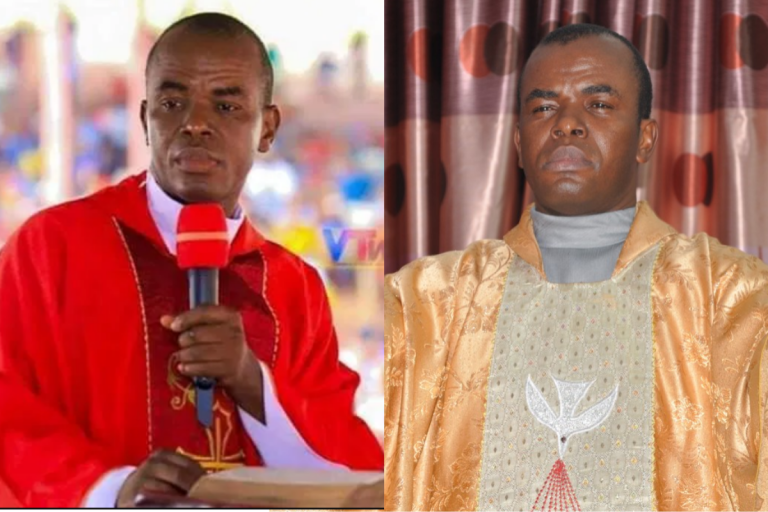 Protesting youths on Wednesday vandalized the official residence of the Catholic Bishop of Enugu Diocese, Bishop Callistus Onaga in protest of the alleged arrest of Rev. Fr. Ejike Mbaka.

The irate youths suspected to be members of the Adoration Ministry and numbering over 1,000 stormed the residence of the Bishop located at Igboeze Street, Independence Layout

Mbaka is the founder and director of the popular Adoration Ministries, Enugu and Parish Priest, St. Mary’s Catholic Church, Emene.

One of the protesters, who craved anonymity, said that they wanted the Bishop to clarify the whereabouts of Mbaka who had not been seen since Tuesday.

The protesters, who were chanting anti-Bishop Onaga songs asked him to resign.

They alleged that Onaga invited him on Sunday for a meeting where he handed him over to the security officers.

Mrs. Stella Nduka alleged that the man of God was invited for a meeting three days ago by his bishop and since then no one had seen him.

“We are going to Bishop Court at Independence Layout to demand his immediate release from his eminence.

“He will explain to us where he kept him since Sunday and he cannot betray our daddy (Mbaka); he cannot be used to arrest him,” she said.

Another member of the ministry, Kenneth Uzoma complained that the members waited for the priest to hold its service early hours of Wednesday but he did not show up.

“This raised questions and suspicions that his rumored missing was true.

“We waited and he did not show up, so we decided to protest at the bishop’s court to demand for his release.

“We were told that his phone numbers were ringing without answering.

“We are angry over everything and will not go until they release him to us,” he said.

The adoration members are protesting at different parts of the state demanding his release.

There was a heavy presence of military men at the bishop’s court trying to curtail the mammoth crowd that besieged the court to ensure that lives and property are not lost.