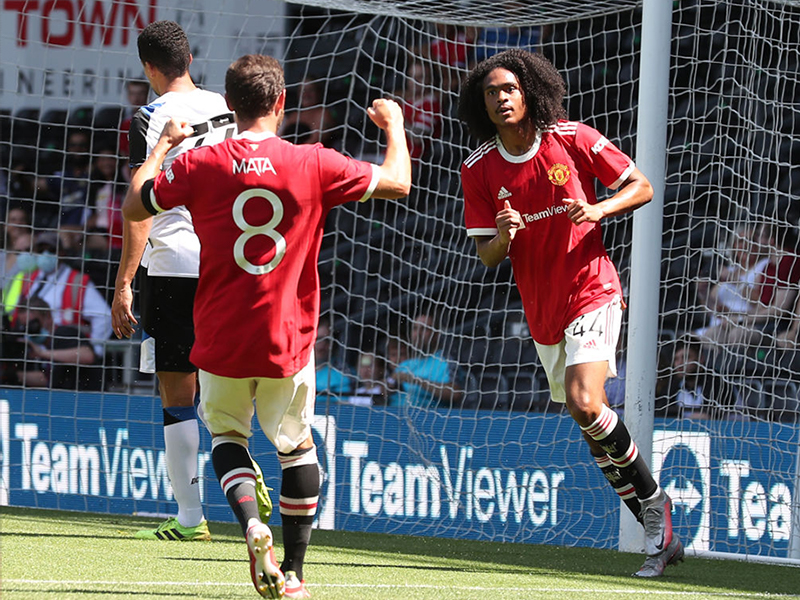 Manchester United kicked off their pre-season campaign by beating Derby County 2-1 at Pride Park on Sunday.

Ole Gunnar Solskjaer fielded a team mixed full of youth-team players and first-team stars – although none who were involved at Euro 2020 – with the visitors leading at the break thanks to Tahith Chong’s well-taken strike after just 18 minutes.

United, who made a raft of changes at the break, doubled their lead when impressive substitute Facundo Pellistri rounded Derby goalkeeper Kelle Roos to score just before the hour-mark.

However, the home team, still operating under a transfer ban, gave manager Wayne Rooney hope of getting a result against his former team when Colin Kazim-Richards thrashed a powerful 35-yard drive into the bottom corner of the net with 20 minutes to go.

The visitors saw out the remainder of the game, though, and now take on QPR at Loftus Road next Saturday.

Meanwhile, Jesse Lingard is part of United’s plans going into the new season, Solskjaer has said.

Lingard, who has been at United since 2011, came on as a second-half substitute at Pride Park after returning to Solskjaer’s set-up following a successful loan spell at West Ham last season.

West Ham are still keen on signing him and are waiting on a decision as to whether he has a future at Old Trafford, which Solskjaer now seemed to suggest he does.

After the game, he said: “He was one of the positives. He’s a Manchester United player and he wants to fight for his place.

“He’s come back bright, confident and with lots of energy. I think everyone saw what he did at the end of last season with West Ham.

“He’s still in my plans. I expect him at Man Utd at the start of the season.”