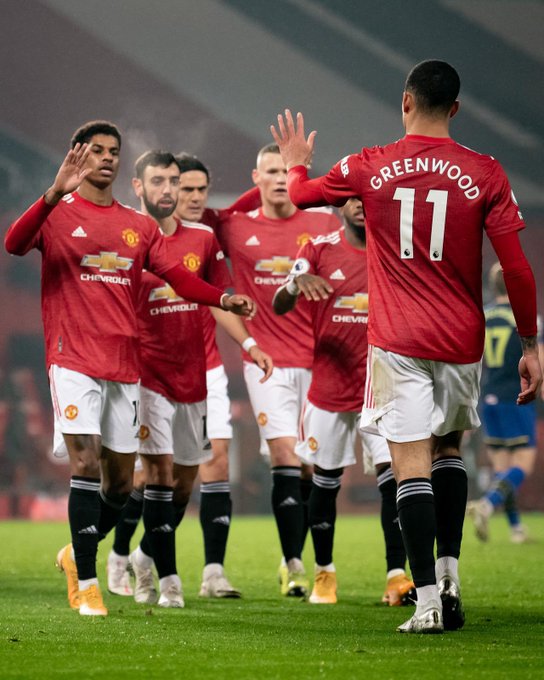 Manchester United manager, Ole Gunnar Solskjaer has admitted that the attacking players have “recovered their mojo” after the 9-0 demolition of Southampton last night.

Marcus Rashford, Edinson Cavani and substitute, Anthony Martial, scored four of the nine goals while Daniel James, Scott McTomminay and Bruno Fernandes (penalty) all got on the scoresheet.

Saints defender, Jan Bednarek scored an own goal before his controversial sending off late in the second half by referee Mike Dean.

He told BT Sport: “We have been waiting for them [the front players] to show the magic, and tonight was the night for them to go and enjoy, we haven’t had too many of them.

He then said in his post-match press conference: “What I liked about the performance was the hunger and attitude to do the right things, get better and better, practice the good habits, and that’s the only way we can improve and get better.

“You can see loads of things we were working on; but we don’t want to be predictable, we want to be a bit unpredictable, and that has to come from the players. The freedom, creativity and imagination was there. The performance was positive and something we can look at – of course, you have to look at them having 10 men, but it’s never easy playing against 10 men either.”

Meanwhile, Rashford surpassed Eric Cantona’s goal tally for the club when he bagged his 83rd goal for the Reds – one more than Cantona and put him 25th on the all-time list of top goalscorers.

Reacting to his achievement as he spoke to BT Sport after the full-time whistle, he said: “He’s obviously a top player [Cantona] that’s done a lot for this club so yeah I’m pleased to go past him and for me I just want to score more goals and keep helping the team…”