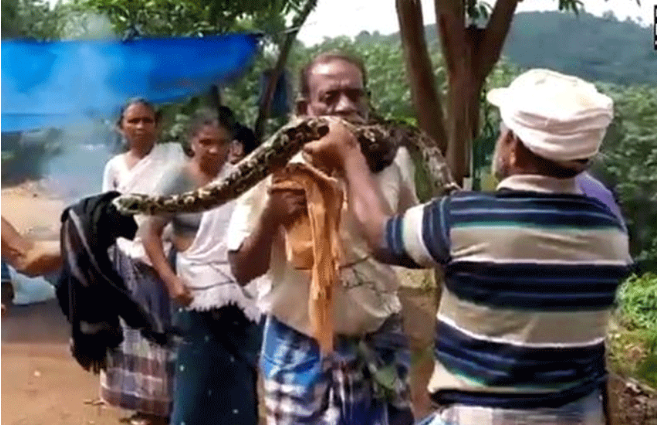 A man escaped death by a whisker in a town in India after being strangled by a 10-foot long python, Mirror UK reports

Harrowing footage shows how some residents of the community battled to untangle the reptile as it tightly wrapped itself around his neck.

It was gathered that the incident occurred on Tuesday October 15 in the city of Thiruvananthapuram, Kerala, southern India, while the man, identified as Bhuvachandran Nair, was cutting off bushes at a college campus.

Villagers try to save Nair who held the reptile in his hand while the other tries to get hold of its tail.

Two other people then slowly uncoiled the python from around his neck and help him get rid of it.

The python had been put under observation for two days after which it was released deep inside the forest.

The man and a few others were doing the work as part of a government scheme at the Kerala Institute of Management campus.

While cleaning, Nair came across an object he mistook for a piece of cloth.

However, as he walked closer to it, he realised it was a 10-foot-long python and decided to rescue it.

The snake, however, was too quick and crawled up his body and climbed its neck.

Farmers have sex more than any other profession, journalists are least – Survey