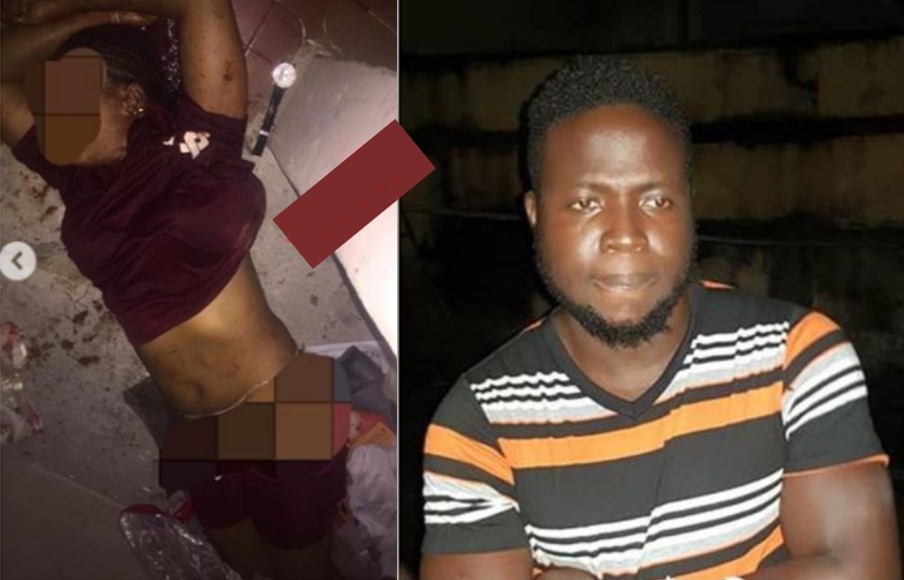 Residents of Corporation Estate at Mile 12, in Kosofe Local Government Area of Lagos State, have nabbed a man for allegedly killing a lady, believed to be a sex worker, for ritual at his residence located inside the estate.

It was gathered that the man whose identity could not be ascertained yet took the lady home late at night and a few minutes later residents heard a shout for help emanating from his apartment.

According to an eyewitness, after hearing the noise, the curious residents instructed the estate security guards not to allow anyone out of the estate as they made attempts to investigate the cause of the noise, it was in the process that they discovered he had killed the lady.

The suspect was said to have confessed to the residents that a herbalist, who he gave his name as Segun, instructed him to kill the victim at exactly 12 midnight and bring her private parts for rituals.

According to an eyewitness who gave an account of how the suspect was caught:

“Around 11:30 pm, my friend and I were outside our gate because there was no light.

“This dude walked past us with a girl and 30 minutes later, we heard a noise from the girl twice, shouting, “help me, please help me” and the noise died down.

“A man later walked up to us and asked if we heard any noise and we said yes. The man said he knows where it came from, so we ran to the main gate to tell the security guards that there should be no movement in or out of the estate.”

“As the suspect was walking up to the gate to leave, we stopped him and told him that we heard a noise, but he initially said he does not know anything about it.

“I then moved close to him to tell him that we saw him when he entered with a girl and asked what happened between them. That was when he said that they had a misunderstanding and have settled it.

“I, however, insisted that we need to see the girl and hear from her if all is well. We then walked him back to his house and upon entering the compound, we saw lot of blood on the floor and a knife.

“He then confessed that he wanted to use the deceased for ritual and it was only her private parts that he was instructed to bring.”

Sex shop assault: Senator Abbo is not above the law, investigate him, Amnesty International tells police