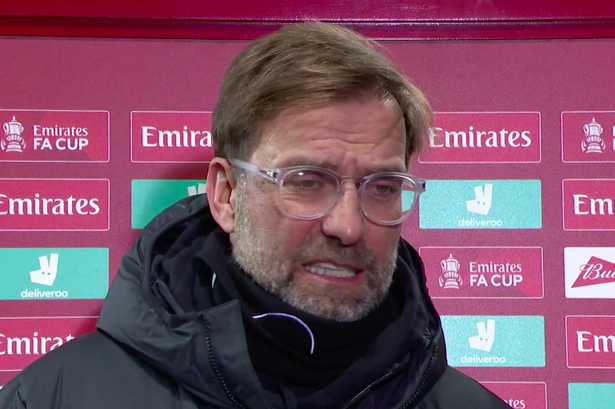 With Manchester City on course to dethrone defending Premier League Champions, Liverpool, manager – Jurgen Klopp, has admitted that no team would find it easy stopping Pep Guardiola’s side.

Speaking during a news conference on Friday, Klopp, according to Reuters, said that he doesn’t expect City who are closing in on their third English Premier League title in four years to take their foot off the gas next season.

However, Liverpool could hand City the league this weekend by defeating second-placed Manchester United on Sunday at Old Trafford, provided the noisy neighbours defeat Crystal Palace on Saturday.

A win for Klopp’s sixth-placed Liverpool would be vital in their quest for a top-four finish as they are on the verge of missing out of next season’s Champions League.

“Two years in a row they had us on their necks. OK, for one year we were ahead of them, but we never expected that to happen for the next 10 years in a row.”

Klopp said Liverpool’s title challenge next season could get tougher with more teams challenging at the top.

“Now Manchester United are coming up. Chelsea are obviously in a brilliant place, a top squad … you can see they’re really good so it’ll not get easier,” Klopp said.

“There will be other teams for sure. Like Leicester City – brilliant manager and a top squad dealing with different situations.

“Nobody should write off Tottenham Hotspur or Arsenal. Obviously West Ham United are now flying. How can it be easier? The good thing about Manchester City is that you only meet them twice a season.”

Klopp stressed that his immediate focus was on Manchester United and winning their remaining games this season.

“We’ll give our absolute everything again next year but for now we’re concentrating on Sunday,” Klopp said.