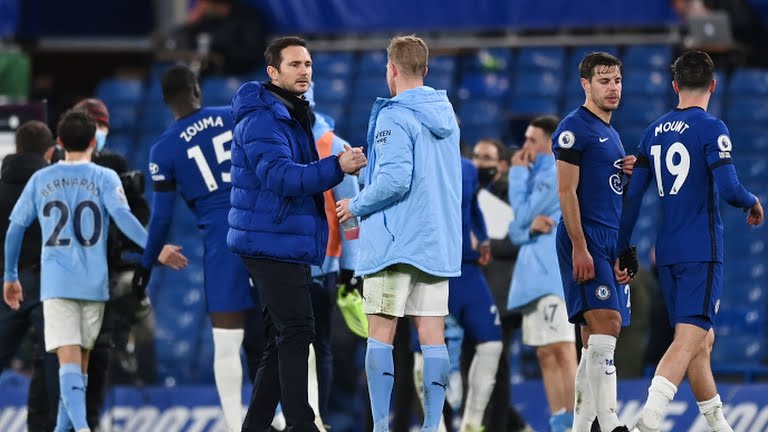 Manchester City inflicted more injuries to Frank Lampard’s underfire Chelsea who began the new year with a 3-1 defeat at Stamford Bridge on Sunday.

Kevin De Bruyne and Phil Foden were instrumental in the victory of Lampard’s Chelsea who are struggling to win a game, having managed only two points in their last six Premier League matches (W1 D1 L4).

MORE READING!  Scripture allows you use your tithe to buy alcohol, including spirits, Reno Omokri says

The Blues were recked in their own backyard in the space of 16 minutes in the first half leaving them with a huge mountain to climb after the first half, one which they failed to do against Arsenal after falling behind by three goals after 56 minutes on December 26.

İlkay Gündoğan opened the show in the 18th minute with an assist from Phil Foden who bagged his goal and City’s second 21st minute after an assist from Kevin De Bruyne.
The Belgian playmaker made it 3-0 in the 34th minute after Raheem Sterling solo effort hit the bar and fell to De Bruyne’s leg who placed it at the right side of the net.
Chelsea, however, got a consolation from substitute, Callum Hudson-Odoi in 90+2nd minute after an assist from Kai Havertz.
Chelsea face League Two side, Morecambe, at the Bridge next Sunday in the FA Cup before a Friday night trip across west London to Craven Cottage to take on Fulham on 15 January.
Related Topics:ChelseaFeaturedFrank LampardManchester City
Up Next