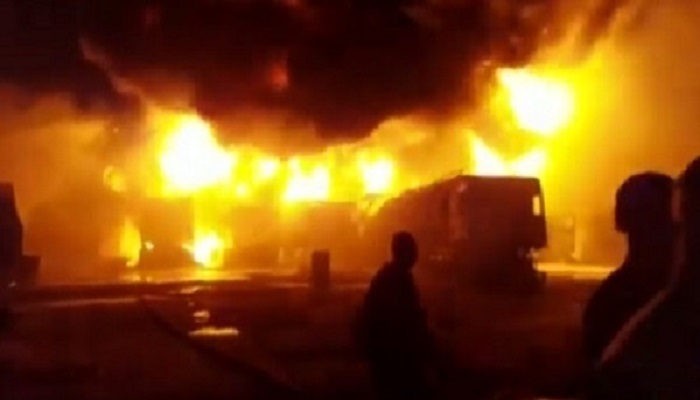 Police operatives from Ejigbo Division led by the DPO, CSP Olabisi Okuwobi, have begun an investigation to unravel the possible cause of the inferno which caused the death of one Abdulahi Nabagodo inside his kiosk in Ejigbo, Lagos.

According to P.M.EXPRES, the incident happened at 4 Alaba Street, opposite Primary School, Ejigbo, where Nabagodo sleeps inside a kiosk.

It was gathered that goods inside the kiosk were also destroyed during the fire incident.

The cause of the fire incident was not yet known since the Police have not concluded their investigation. But according to the residents, the fire broke out at about 2.30 am when people had gone to bed.

The Police, when contacted, raced to the scene in order to help put off the fire which attracted the attention of the residents who had to wake up that early morning.

However, it was too late as the deed had been done. The Police team led by one Supol Kasali Adetokunbo rushed to the scene and discovered that Nabagodo was already dead and the goods inside the kiosk were destroyed.

The charred corpse of the deceased was evacuated by the members of Hausa Community resident in the area for burial according to Islamic rites.

MORE READING!  One dead, three others injured in stampede for Tambuwal’s cash

The late Nabagodo was said to be from Kebbi State but came to Lagos and set up the business where got burnt and died in the process.

Related Topics:KioskLagosMan burnt to death
Up Next

American mom, 23, who left Texas to visit her boyfriend found dead in Mexico with all her teeth removed