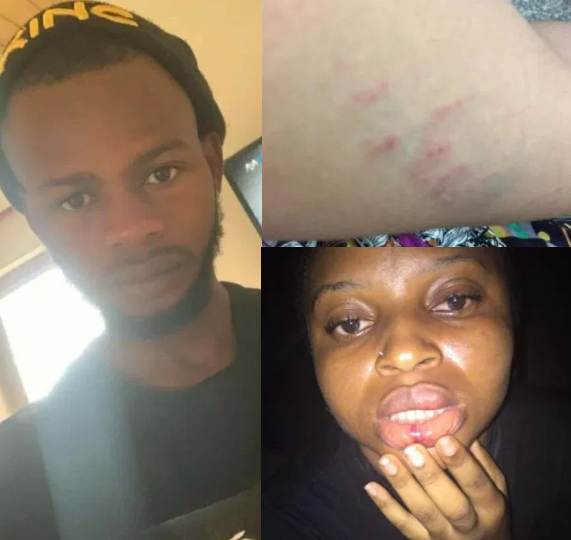 A lady has taken to social media to call out her childhood friend for allegedly holding her hostage, beating and raping her after he lured her to Ghana to learn Forex trading.

Narrating her ordeal Clement Vanessa Ogechi said she knew her rapist, one Emusi Clinton, from secondary school, where she was the head girl.

Ogechi revealed that Clinton told her he is into Forex trading and promised to teach her how to make money by being a Forex trader if she could visit him in Ghana where he is now based.

She said before she left Abuja for Ghana earlier this month, she made him promise he will not ask for sex or anything other than the business that took her to Ghana and he promised.

According to Ogechi, on getting there on October 7, 2019, she found out he’s into online fraud and runs a house where young boys are made to work from morning till night on their laptops with the aim of defrauding innocent people online.

She said he told her that she must work to get him a client before he will give her transport fare to return to Nigeria.

He allegedly locked her in the house and only let her sleep from 12 midnight till 4am, after which she will wake up and start working on a laptop.

She also accused him of beating her and raping her twice. She showed photos of her injuries.

She said she eventually escaped early in the morning, on October 11, while everyone was still asleep, and she ran to a police station in Ghana. According to Ogechi, Clinton and his accomplices were eventually arrested and she was able to return to Abuja on Sunday, October 13, at about 3 pm.

I said I was gonna share a tragic story with you guys yesterday. Well, here it is.

I used to know a guy named EMUSI CLINTON, who now goes by the name ‘Successful OG’ We were classmates in secondary school from 2011-2014. Although we weren’t friends, but he was friends with my friends. Then From 2013/2014, I was made the head girl of the school. People like Mimi Jacobs Joy Stanley and Okwuwe Onyinye can attest to this. So because of this reason, he started talking to me more often. We spent most of our Teenage years in Agbor, Delta state where I grew up. We never dated, never had any sexual activity of any sort. Just a Hello hello kind of friends. After graduation, everybody went their separate ways…

So a few months ago, he reconnected with me on Facebook. I couldn’t even recognize him again until I went through his old photos. We exchanged pleasantries. I asked him what he does for a living, he told me he was into an online trading. So I told him I was interested in learning FOREX trading. He said he could teach me but he is not close. And that it’s not something he’ll be explaining to me on the phone. That he now base in Ghana. That if I can find my way to Ghana, his base, he promise he can help me with it.

I told him to give me some time to run around to see if I can get some money from a few friends to complete my T.P. Trust me I didn’t get any help from any friend. Maybe this was Gods own way of asking me not to go, but I didn’t listen. I told him I didn’t get help from anywhere. So he told me to find my way to Lagos, that if I can get to Lagos, he will pay from Lagos to Ghana. I got ready and traveled from Abuja to Lagos on 5/10/2019. To cut the story short, I got to Ghana the next day. I started calling him when I got there, but he didn’t pick my call again. I stayed in the park so late that the people there started talking shits like ‘she’s a prostitute, ‘she came to see a Facebook friend’, ‘she’s an abandoned runsgirl’. I was so ashamed of myself that day. I slept in that park till the next morning. He called me by 5am and started apologizing, that he was sleeping. I was just so perplexed that I didn’t even know what to say to him. I got to his house on 7/10/19. This was the last time I saw outside the house or it looked like from outside. Before I left Abuja, I made sure we had a mutual agreement like he wouldn’t ask me for anything other than the reason that made me leave. And i accepted to embark on this journey because I thought I knew him based on the fact that we were old secondary school buddies.

I got to his house that very day and the story changed. He said my Transportation back to Abuja depends on what I can do using the laptop. That if I can’t make clients pay, that means I am stocked with him. This was the day my doom began. I met three other guys in the house. All of them were working under him. He said I’ll sleep 12am and wake up by 4am, same with the other guys. We do this every day. I fell ill the second day. The same routine every day. I chatted him the 4th day and told him I wanted to go back that I couldn’t continue.

He said he already told me that my T.P depended on the clients. He even said he didn’t want me to be pressing laptop anymore, that I should move to his room. I should pretend to be his girlfriend while we engage in a sexual relationship. I told him I can’t do that. I begged him to send me back that I’ll send him back the T.P he paid both to and fro when I get back home. He refused and kept quiet.

On thé 10/10/19 around 1:am midnight, he woke me up and asked me to leave his house. He pushed me out of his house, collected my phone and locked his gate. I couldn’t believe my eyes. I even thought I was dreaming. I pinched myself to make sure what was happening wasn’t true. I just realized it was true.

So I stayed outside for 30mins. He later opened the gate. He pretended to be sorry. Started apologizing to me. I followed him back inside again. immediately we got into the room, started pounding me. I was just begging the ground to swallow me. I prayed to die than let him touch me. Unfortunately my prayer wasn’t answered. I ended up being raped. He was raping and beating me at the same time till he spilt his disgusting fluid on me. I cried myself till the next day morning.

The next day, been the 11/10/19, he repeated what he did to me the other day again. This time it was 2:13am. The other guys were just quiet in their room. This time he made sure he raped me till I stopped talking. He beat me till the left side of my face got swollen. You can see the bruises on my lips, that’s because he hit my mouth. I prayed for death, I didn’t see it.

As early as 5:am, I woke up. Seems the other guys didn’t work that day because they were busy sleeping. I opened the door. I looked for a means to leave the compound. God did it, I was able to jump out of the house. Immediately I saw a man taking his child to school, I pleaded with him to give me a lift. He directed me to the nearest police station. I reported to Ghana police station in the area. So took some police men to the house. They got him arrested and the other guys. The police officers asked me if I wanted to make a case. I refused because that would have delayed my return. I didn’t want to waste any more time. I just asked them to tell him to give me my T.P. They released the other guys because they were innocent. I took my T.P from the police men and left while they still negotiating how much he will pay to be released. I left that same day. I got back to Abuja yesterday around 3pm.

Guys this is a true story of what happened to me live. This one is not audio. I am not sharing this to draw any attention of any sort, I am sharing this story so you can learn from it. If you don’t have a family, and you know you can’t take care of yourself when the worse happens, don’t embark on that trip. Don’t think you know him since child hood will save you. You can forward to anyone important to you, who knows you might save a life.