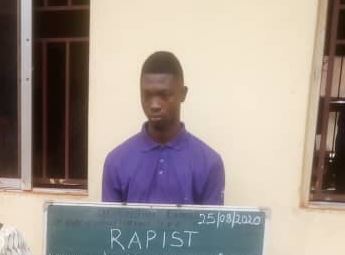 A 27-year-old  man is in police custody for allegedly raping a 10-year-old girl in Otukpo, Benue State.

Inalegwu Ochekwu was said to have raped the girl, simply identified as Franca, last Saturday.

According to the little girl, she had been sent to look for her sister which she said took her to the suspect’s shop who is an apprentice dry cleaner.

“When I went to their shop, to find out whether he saw my sister, the man said no, but as I was going back, the man grabbed me.

“As I was shouting asking of what was happening, he carried a cloth to cover my mouth and I struggled with him, he pressed me down, tore my cloth and forced himself on me and my body was stained with blood,” Franca said.

MORE READING!  VIDEO: I think my boyfriend has broken up with me, BBNaija's Nengi reveals

She thanked the DPO for facilitating the movement of victim and culprit to command headquarters in Makurdi.

When contacted, the State Command spokesperson, DSP Catherine Anene said she was yet to be briefed.

“I have not been briefed, because I have been busy with recruitment exercise”, Anene said.

Related Topics:FeaturedfraudHushpuppiRamon Abbas
Up Next