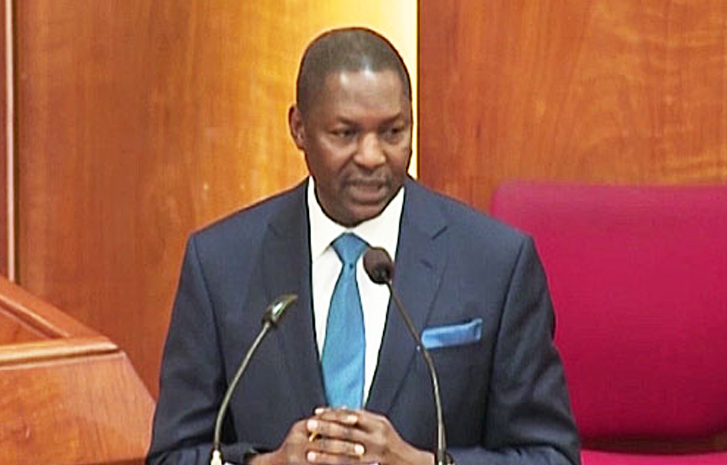 A lawyer, Victor Giwa, has accused the Attorney-General of the Federation, Abubakar Malami (SAN), of ordering his arrest because he refused to implicate the suspended acting Chairman of the Economic and Financial Crimes [EFCC] Commission, Ibrahim Magu.

Giwa, who was recently released from the custody of the EFCC, in a statement yesterday, said Malami ordered his arrested and that of another lawyer, Fatima Hassan, because of his decision to “stand to defend the truth and not to consent to the subversion of Justice.”

The duo were arrested last week shortly after they testified before the Justice Ayo Salami-led panel which is investigating Magu.

Giwa’s former client, Donald Wokoma, who was a Director at Damijay Integrated Services, had told the panel through a sworn affidavit that his bank account was frozen by Magu unjustly and he subsequently hired Giwa to sue the EFCC.

Wokoma, who is a former special assistant to Vice-President Yemi Osinbajo, had said after the court ordered that the account be unfrozen, Magu through his ‘boys’ demanded N75m from him as a condition for obeying the order.

MORE READING!  Vee calls Ozo an agent of devil for doing this

Wokoma, who submitted text messages and audio clips of his conversation with Giwa, said the latter told him that Magu had demanded the money and advised him as his lawyer to pay the bribe.

However, when Giwa appeared before the panel, he denied the bribery allegation, insisting that Magu was a man of integrity. This led to his arrest.

Giwa, however, accused the AGF of instigating his arrest.

He said this in a statement titled, ‘Attorney General of the Federation, Abubakar Malami (SAN) Is Using Donald Wokoma, My Erstwhile Client Against Me For My Refusal To Testify And Indict Ibrahim Magu, Acting Chairman of EFCC, At The Justice Ayo Salami Panel Investigating The EFCC Boss’.

“On August 18 and 19, 2020, I was invited by the Justice Ayo Salami Panel, sitting in Aso Villa to testify against Ibrahim Magu through a conspiracy between the AGF, Malami (SAN) and Donald Wokoma, the sacked Special Adviser to the Vice President Prof YemiOsibanjo, whom I have represented and secured a judgement in his favour,” the statement read.

“Donald Wokoma was investigated for fleecing the sum of N250m from amnesty programme, through his company Damijay Integrated Services, by receiving contracts he never executed. His account was restricted by the EFCC.

“On July 11, 2020 Donald Wokoma was scheduled to be arraigned before Justice Akanbi at FCT High Court, Lugbe. Donald Wokoma was absent and I represented him and the case was adjourned till October 10, 2020 for arraignment.

“Donald (Wokoma) in a desperate move to subvert the administration of justice, to quash or suspend his trial conspired with persons in the AGF office who had promised to frustrate the trial and release (sic) the restricted account.

“To achieve this aim the AGF requested that Donald (Wokoma) have me to do a petition against Ibrahim Magu to the Justice Ayo Salami Panel, accusing Ibrahim Magu of graft and having me to testify against the EFCC boss, an offer I declined.

“Donald (Wokoma) in cahoots with the AGF procured a lawyer who did the petition, which was forwarded by the AGF to the panel.”

The lawyer said surprisingly, Wokoma in a sudden twist, accused him of being a ‘Magu boy’.

“It was my refusal and my stand to defend the truth and not to consent to the subversion of Justice that the AGF ordered my arrest and that of Fatima Hassan, a lawyer, whose testimony absolves me and Ibrahim Magu from any wrongdoing,” Giwa said.

Attempts to get a reaction from the AGF proved abortive as he neither responded to calls nor a text message on Monday.

Similarly, his Spokesman, Umar Gwandu, could not be reached for comment.

Related Topics:AGFEFCCFeaturedMaguMalamiVictor Giwa
Up Next