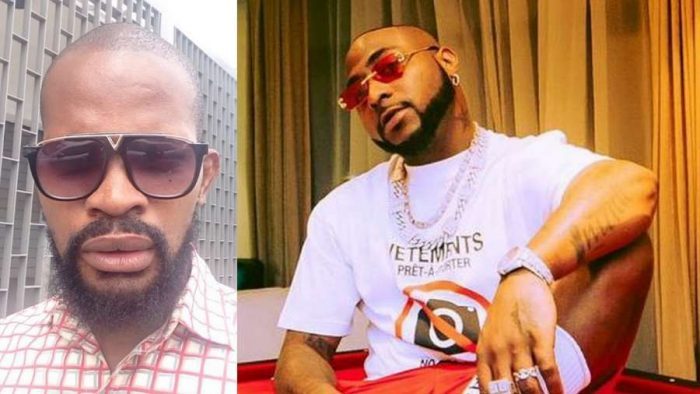 Controversial Nollywood actor, Uche Maduagwu, has berated Davido for stooping so low to #sagging and drinking in public to mourn his friend Obama DMW.

Maduagu said it was the height of mockery and a lack of empathy.

WuzupNigeria had earlier reported that Obama DMW reportedly died from a suspected heart failure after he walked into Ever Care Hospital in Lekki to complain about his health.

Days later, a video of Davido indulging in alcohol while sagging his pants after he had been away from social media for a while surfaced online.

In photos shared by a fellow singer, Mayorkun, Davido was seen rocking a face cap with ’44’ on it as a sign of respect to his friend, and partner, Obama DMW.

Maduagwu however saw Davido’s action as the height of mockery and didn’t hesitate to share his opinion on Instagram.

He said; “Omg this is unfair and the height of mockery, even an agbero under ojuelegba bridge will never stoop so low to be #sagging and drinking in public to mourn a friend”

“That moment is the only time they do sober reflection but look at the radarada #davido dey do for #atlanta and his #boys dey lie to us sey baba dey mourn, some celeb even insult me for asking why he refused to eulogize #obamadmw on his social media page, now u all know why or does this look like mourning abi massive celebration”. 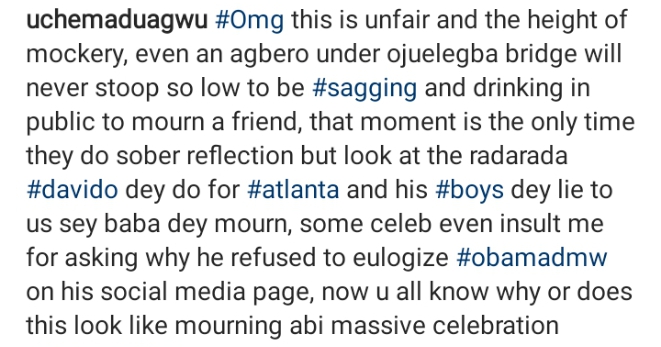 Related Topics:DavidoInstagramUche Maduagwu
Up Next