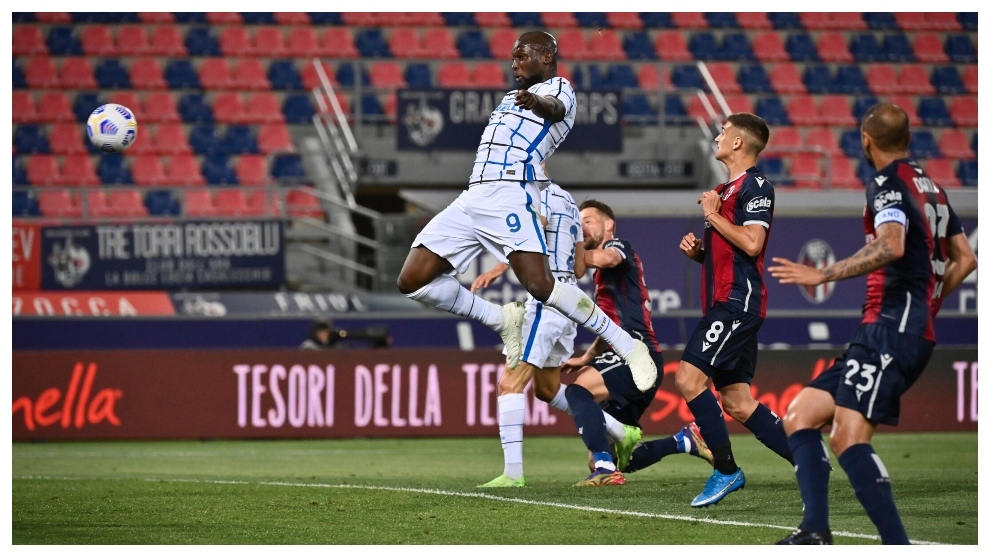 Belgium’s forward, Romelu Lukaku, pulled Italian giants, Inter Milan, eight points clear at the top of Serie A on Saturday with the only goal in a 1-0 win at Bologna.

This is just as title rivals Juventus and AC Milan were both held to a draw.

“Winning is a big step forward for us,” said coach Antonio Conte after second-placed Milan’s challenge faltered in a 1-1 draw with 10-man Sampdoria and champions Juventus were held 2-2 at city rivals Torino.

Conte’s side stretched their winning run to nine league games as they chase a first ‘Scudetto’ since 2010, having finished runners-up last season.

“Last year we nearly got there. The closer we get to the finish line, every victory becomes more important,” added the former Juventus and Chelsea manager.

Lukaku got his head to an Alessandro Bastoni cross after half an hour and bundled the ball over the line for his 20th league goal this season after Bologna’s young goalkeeper Federico Ravaglia had pushed out the initial strike.

Lautaro Martinez missed a chance for a second five minutes after the break when he rattled the post.

Inter next play Sassuolo on Wednesday, a match postponed from before the international break because of a Covid-19 outbreak in the Milan club.

In Turin, Cristiano Ronaldo struck in the 79th minute but couldn’t stop Juve dropping further points in their bid for a 10th consecutive league title.

Andrea Pirlo’s side slip to fourth, 12 points behind Inter, and four points back from Milan, with a game in hand.

“We complicate these games all by ourselves,” lamented Pirlo with his team’s Champions League qualification also in the balance.

“We must push on, keep giving our all and try to secure our minimum target, which is qualifying for the Champions League,” said captain Giorgio Chiellini.

“We have another important match on Wednesday and it’s one we need to win,” he added of their midweek postponed fixture against European rivals Napoli.

Federico Chiesa had given Juventus the advantage in the 13th minute, but an Antonio Sanabria brace looked set to give the relegation-threatened hosts their first derby win in six years.

The Paraguayan nodded in the leveller in the 27th minute after Juve keeper Wojciech Szczesny had pushed out a long-range Rolando Mandragora effort.

Sanabria struck a second time just after the break when he intercepted a misplaced Dejan Kulusevksi back pass.

Ronaldo missed two chances before the Serie A top scorer finally got his 24th league goal this campaign following a VAR review when he nodded home Chiellini’s cross from close range.

Milan’s miserable recent form at the San Siro continued in their draw with Sampdoria.

A terrible Theo Hernandez pass across midfield in the 57th minute allowed Sampdoria veteran Fabio Quagliarella to pounce and send a long-range lob over Gianluigi Donnarumma to claim his 10th goal of the season.

Claudio Ranieri’s mid-table side went a man down just after their goal with Adrien Silva sent off after picking up a second yellow card.

Substitute Jens Petter Hauge curled in the leveller three minutes from the end, with Franck Kessie denied a late winner after hitting the woodwork.

“There are no excuses,” said coach Stefano Pioli, whose team’s push for a first league title in a decade has been hampered by just two wins from eight home games in the league in 2021.

“Inter have the Scudetto (league title) in their hands. It’s theirs to lose.”

Atalanta are two points behind Milan in third after a 3-2 win over against Udinese which came thanks to a first-half Luis Muriel brace and Duvan Zapata adding a third after the hour mark in Bergamo.

Napoli claimed their fourth consecutive win, but not without a battle from bottom side Crotone who lost a dramatic contest 4-3.

Three goals in 33 minutes from Lorenzo Insigne, Victor Osimhen and Dries Mertens looked to have sealed victory early for Gennaro Gattuso’s side.

However Crotone fought back to 3-3 largely thanks to a double from Nigerian Simy the 25th and 48th minutes.

But Giovanni Di Lorenzo made sure the home side did take the win with his 72nd-minute strike.

Roma stretched their winless run to a three matches with a 2-2 stalemate at Sassuolo.

We completely deserved to lose the game, Arteta says after Liverpool defeat