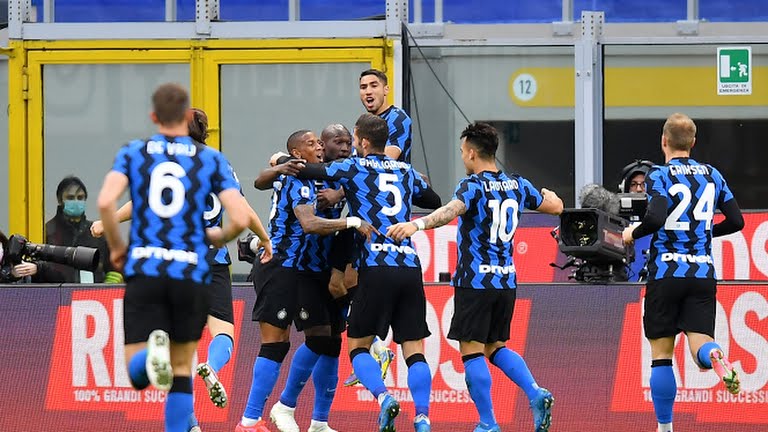 Romeo Lukaku and Lautaro Martinez were on the score sheet as Inter go 11 points clear on the Serie A table.

Antonio Conte’s men increased their chances of winning the league after a 2-1 win over Sassuolo on Wednesday evening.

The Nerazzuri took the lead just 10 minutes into the game through Lukaku who found the back of the net with a perfect header after a cross from his former Manchester United teammate Ashley Young.

Lukaku had a hand on in the second goal when Inter broke from the back albeit Sassuolo player signalled the ref for a potential penalty following shirt-pulling incident.

Inter were in no mood to wait for the whistle as Lukaku put a pass across to his strike partner in a one-on-one with Sassuolo’s keeper.

Martinez found the right corner to double the lead for Conte’s men.

Hammed Junior Traore got a consolation for the visitors but it wasn’t enough to dampen the party for Inter at the San Siro Stadium.

Lukaku almost double his assist by putting ex-United star, Alexis Sanchez in a scoring position but unlike Martinez, the Chilean squandered the chance to make it 3-1 late in the game.

Inter are now 11 points clear of second-placed AC Milan and 12 adrift of defending champions Juventus who beat Napoli 2-1 on Wednesday.

Andrea Pirlo’s men are now one point ahead of fourth-placed Atlanta as Gennaro Gattuso’s Napoli sit fifth with two points behind Atalanta.