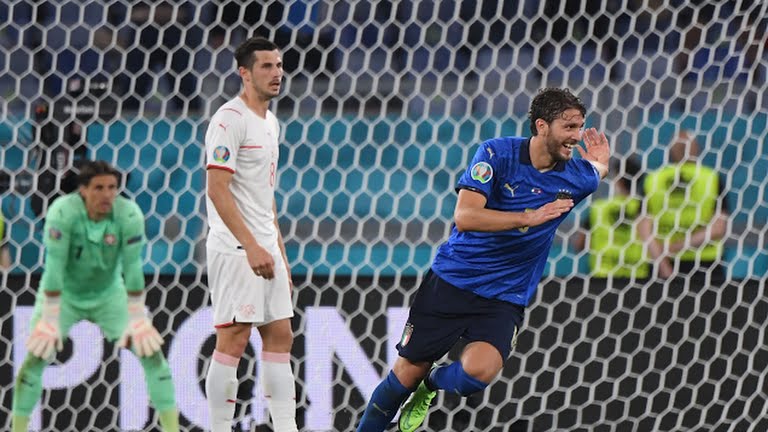 Italy have qualified for the EURO knockout stage after a resounding 3-0 victory over Switzerland on Wednesday at the Stadio Olimpico in Rome.

Roberto Mancini made a single change to the side that beat Turkey 3-0 on their EURO opener that saw Alessandro Florenzi limp off with a calf injury which ruled him out today while Di Lorenzo comes in as a replacement.

Giorgio Chiellini thought he scored Italy’s opener in the 19th minute after jumping between two Swiss players to a corner from Lorenzo Insigne caused confusion in the box but it was ruled out by VAR for handball.

Manuel Locatelli got the opening goal in the 26th minute by beating Swiss goalkeeper, Yann Sommer, from close range after an assist by Domenico Berardi, giving Roberto Mancini’s men a halftime lead.

Locatelli who plies his trade with Sassuolo doubled the lead in the 52nd minute after an assist by Inter Milan’s Nicolò Barella, beating Sommer yet again.

Lazio’s Ciro Immobile completed the victory in the 89th minute after a mistake from Switzerland at the back to hand the Italians a 3-0 win which takes them atop Wales in the Group A log.

MORE READING!  Olympics: Another blow for Nigeria as Amusan misses medal in women’s 100m hurdles
Related Topics:Euro 2020ItalyLocatelliSweitzerland
Up Next