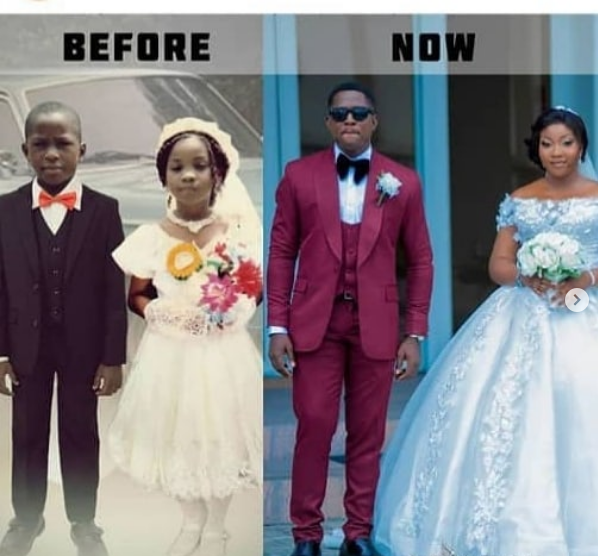 Because it’s flashback Friday, a Nigerian lady has shared epic flashback photos of herself and her beau and the pictures are already amassing several reactions on social media.

The lady identified simply as Brenda and her husband, Joel, were little bridesmaid and ring bearer respectively at a wedding many years ago when they were kids.

The duo kept the friendship and it eventually metamorphosed into a marriage, though she admitted that no one could have imagined it would turn out that way.

In one of the photos, the lady’s father was carrying in his arms a little boy who turned out to be his son-in-law after 27 years.

Brenda said though their parents have been friends long before they were born, they never influenced how they got married.

“This had nothing to do with an arranged marriage,” she said.

READ ALSO: Today is another day, says driver fired by employer as he returns to duty the next day

“Just cos it’s Friday. My #flashbackfriday puts forth the story of my life. Who would have known that this would happen? From being little bride and groom, from being just family friends, from being the only older person I knew to help me with the kids that would bully me in primary school, we’re now husband and wife.

“My parents and hubby’s were friends long before I existed this had nothing to do with an arranged marriage, because we became an item officially 2 years ago because I and my family relocated and we lost contact till 2013, thanks to FB and BBM.

“Just look at my dad carrying my husband in his arms not knowing he’d become his son-in-law 27 years later. Jehovah was definitely involved and we’re indeed grateful.”

Related Topics:bridegroomBridesmaidFeaturedgroomNigerian wedding
Up Next

Today is another day, says driver fired by employer as he returns to duty the next day