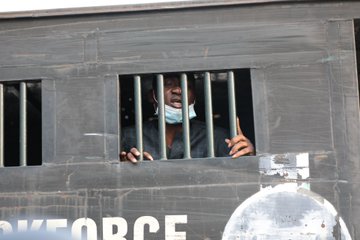 Popular radio personality, Toke Makinwa, has joined Nigerians on Twitter to react to the arrest of protesters at the Lekki toll gate on Saturday.

At least 18 #OccupyLekkiTollGate protesters who moved to protest the reopening of the Lekki Toll Gate were reportedly arrested by security operatives deployed to the protest ground by the Lagos State Government to prevent the planned protest.

Amongst those that were arrested on Saturday morning was a popular Nigerian comedian, Debo Adebayo popularly called Mr Macaroni.

The protest was triggered by the Lagos State Judicial Panel of Inquiry investigating the alleged shooting of #EndSARS protesters by soldiers at the Lekki toll gate in October 2020 after it permitted the reopening of the toll gate.

The move also led popular #EndSARS campaigner, Rinu Oduola, who is a youth representative on the Lagos State Judicial Panel of Inquiry, to step down on Thursday, saying that she refuses to be part of a cover-up.

Meanwhile, Makinwa took to Twitter to question the government’s treatment of its citizens by asking, “what is our offence?”

“A government constantly looking for how to make its citizens bleed, bad governance, police brutality, poverty, extortion, lack of Jobs, failed educational system, and the list is endless, what is our offence? #EndSARS #EndBadGovernanceInNigeria #Lekkitollgate,” she tweeted.

Also, popular social media influencer, Japhet Omojuwa, questioned the justification of the arrest of the protesters, including Mr Macaroni.

He tweeted, “The Rights to Peaceful Assembly and Association and the Right to Freedom of Movement are fundamental human rights in the 1999 constitution and the African Charter on Human and People’s Rights. What are the #OccupyLekkiTollGate protesters & Mr. Macaroni being arrested for?”

MORE READING!  #EndSARS: Only a hoodlum can keep $2m, N17m at home instead of bank, Nigerians attack Oba Akinolu

“There’s always so much energy on PEACEFUL PROTESTERS! #EndSARS But y’all is been fighting Boko Haram since 2002! SHAME ON ALL OF YOU,” she tweeted.

Why do govts, with all their power, still feel compelled to quash peaceful protests? Why this insatiable desire to control everyone and everything? Why are leaders so juvenile in their thinking? What if policemen were trained to protect peaceful citizens? #EndSARS #LekkiTollGate

That we decide to be law abiding is not a reason for government to take us for granted.

We have seen the Nigerian govt turn to left over spaghetti in the presence of killer herdsmen, kidnappers, bandits, Boko Haram etc who decided not to be law abiding #LekkiTollGate#EndSars