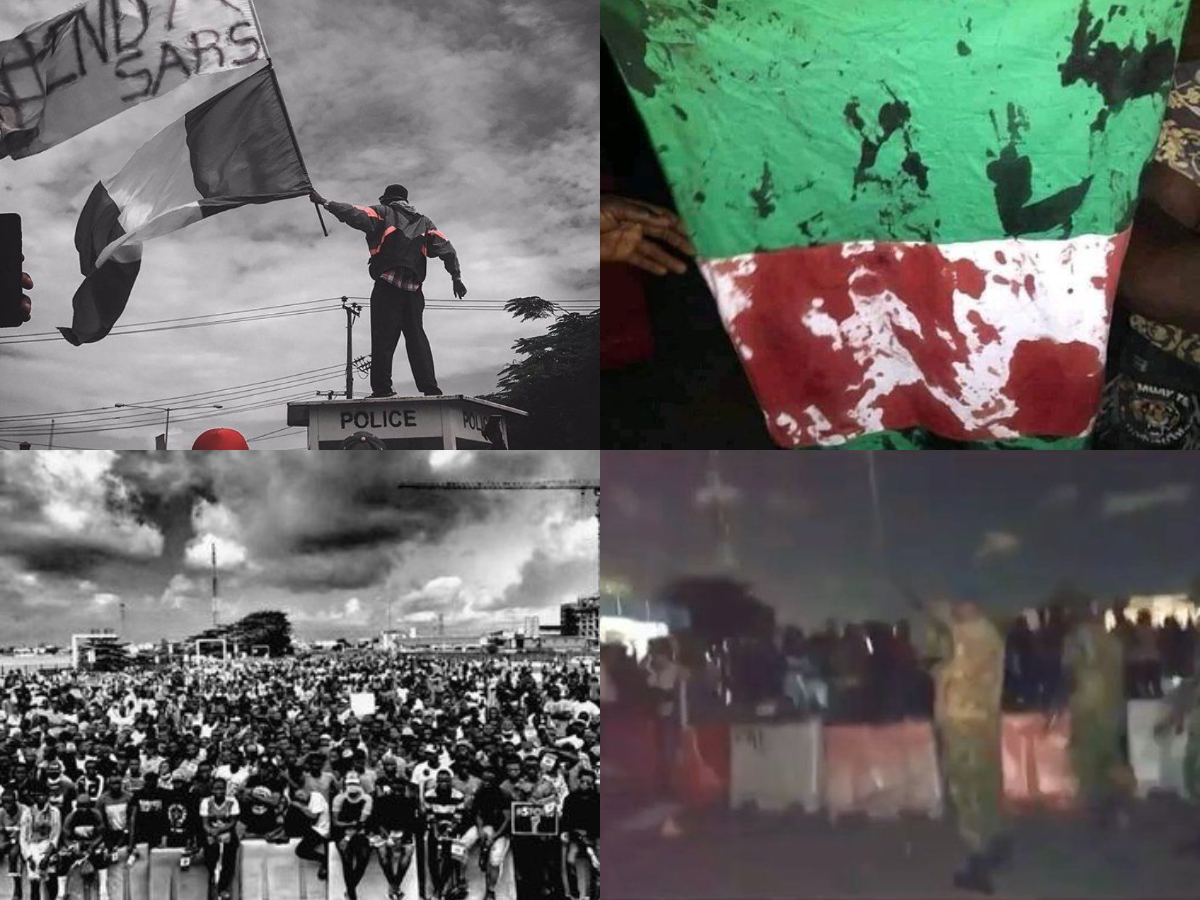 Nigerians have taken to Twitter to remember ’20/10/2020′ – a month after security operatives in military uniforms shot at unarmed #EndSARS protesters at the Lekki Toll Gate.

Despite claims that a number of protesters died during the shooting, the government and the military have continued to counter the claims as they maintained that there were no casualties because the soldiers did not fire directly at or use live ammunition on the protesters.

Although the government’s inconsistent reports can’t be overlooked, a CNN report this week changed the narrative from against the government, providing evidence from a bullet shell picked up at the scene as one from live rounds. It went further to provide a witness whose brother was said to have been killed at the scene.

While the report by CNN has left the government infuriated as it threatened sanction on the foreign media, CNN has vowed to stand by its report, demanding counter-evidence from the Nigerian government.

The #EndSARS movement which was championed by Nigerian youths demanding an end to police brutality was peaceful until Oct 20 when the soldiers carried out the shooting. Thugs and hoodlums the unleashed mayhem in many states as they destroyed public and private properties and looted businesses.

Although the government has ruled out any occurrence of a massacre, Nigerian youths refuse to believe their reports as the #LekkiMassacre trends on Twitter.

Here are some tweets as Nigerians remember the heartbreaking incident:

“20.10.2020 A month ago, the Nigerian army opened fire on peaceful protesters, killing and wounding dozens. What saddens me the most is the complete denial that this happened. We need to make sure this day is never forgotten,” @ireaderinokun tweeted.

Another user, @madona1996 said, “The oppressors are trying so hard to bury this truth but will never succeed. 20:10:20 happened thanks be to God it has gone international. #EndSARS #LekkiGenocide #LekkiMassacre”

Today makes it a month since our Lekki Toll gate Protesters were brutally massacred yet no one has been held accountable. Don’t ever think we have forgotten this…

WHO ORDERED THE SHOOTING OF INNOCENT CIVILIANS ON THE 20TH OF OCT. 2020?#EndSARS #LekkiMassacre #LekkiGenocide pic.twitter.com/6oE46eL4kT

One month now and we still have just one question for the Nigerian Government; “who ordered the shooting at Lekki on 20-10-2020?” #LekkiGenocide pic.twitter.com/Le6uhYi6Mg

One month now and we still have just one question for the Nigerian Government; “who ordered the shooting at Lekki on 20-10-2020?” #LekkiGenocide pic.twitter.com/Le6uhYi6Mg

Today, 20-11-2020 makes it a month that innocent and peaceful protesters at Lekki Toll Gate were killed by soldiers for asking for their basic right.

It’s been a month since innocent unarmed protesters were brutally killed while some were gravely injured at Lekki toll gate at the hands of people who vow to protect them.
20/10/2020.
If you come across this, please retweet.
These heroes must not be forgotten.
#LekkiGenocide pic.twitter.com/UB88j5OvPf

Related Topics:#EndSARS#LekkiMassacreFeaturedLekki shootings
Up Next