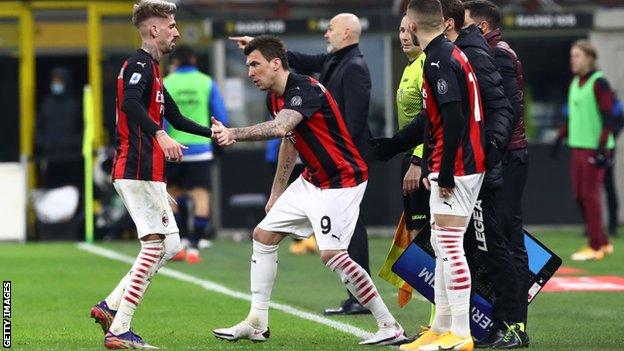 Serie A leaders AC Milan lost 3-0 at home to Atalanta Saturday as second-placed Inter Milan only partially profited by drawing 0-0 at Udinese.

Inter lacked pace and precision in rainy Udine, where their coach Antonio Conte was dismissed for his protests on 90 minutes.

But the result meant the Nerazzurri inched within two points of the Rossoneri at the halfway mark of the league season.

The Milanese rivals next play a city derby in Tuesday’s Italian Cup action.

“We must look at ourselves, not at AC Milan and their possible losses,” Inter Milan boss Antonio Conte said.

“We must work to improve, and I think we have room for improvement. Today we lacked quality in the final pass, which is crucial because it can either let you score or have a wasted chance.”

In Milan, Cristian Romero did not waste the cross from Robing Gosens and nodded home Atalanta’s opener in a first half controlled by the Bergamo guests.

They struck again from the penalty spot when the inspired Josip Ilicic was fouled by Franck Kessie and he rose to convert on 53 minutes.

But they were stunned again when Duvan Zapata stormed down the left to score in the 77th minute.

“They were more clever than us,” AC Milan coach Stefano Pioli said. “But we are still strong. A bad game can happen.

”But I am sorry about the second goal because had we averted it we could have stayed in the game until the end.

“We know the league is very competitive and we can have our say. Today [Atalanta] were superior also physically, but the defeats are to be analysed and we must learn from them, and then look ahead to the next games.”

Roma edged promoted Spezia 4-3 in an earlier stoppage-time thriller and avenged the midweek elimination suffered in the Italian Cup against the visitors.

MORE READING!  It should have been a penalty, Arteta reacts after Burnley setback

Lorenzo Pellegrini’s dramatic added-time winner, after Daniele Verde equalised for Spezia in the 90th minute, pushed Roma to third, four points behind Inter Milan and one above Atalanta.

Borja Mayoral struck twice for the Romans, though the visitors levelled temporarily for 1-1 through Roberto Piccoli’s effort.

Rick Karsdorp made it 3-1 but the newcomers bounced back as Diego Farias scored on the hour to set up the frantic finale.

Spezia, who are playing their first top-flight season, sit next to Udinese four points clear of the drop zone.

Matchday 19 has five more games scheduled on Sunday, with champions Juventus sitting sixth when they host Bologna, and Napoli one point above the Turinese before playing at Verona.