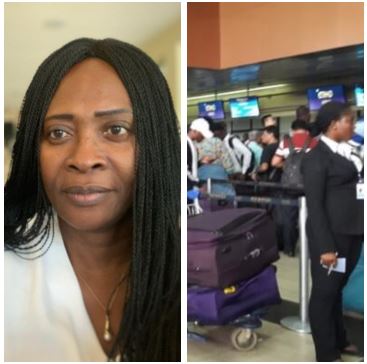 A lawyer and management consultant, Iyabo Awokoya has expressed the frustrations that Nigerians and other travellers are subjected to at the Murtala Muhammed International Airport in Lagos.

Awokoya, who shared her displeasure via her official Twitter account, noted that the disorderly manner and lackadaisical attitude of airport officials frustrate travellers coming in or going out of the country.

The legal consultant who arrived the country last week called on the Minister of Interior, Ogbeni Rauf Aregbesola to address the bottlenecks by sanitising the aviation sector.

“I have been struggling with this since returning from my UK trip last week, but my conscience insists I must say it: Rauf Aregbesola the immigration services at the MMA (Lagos Airport) is a disaster. I can’t believe that this Agency is under you sir.

“Arrived on BA at about 7.10pm. Disembarked and was in a queue for at least 2hrs 30mins. Got home at about 10pm and home is just 10minutes away from the Airport. Sir, the system there can be styled “no system” or “confused system.”

The 60-year-old consultant, who co-founded Awokoya, Awokoya & Co with her husband in 1986, drew the minister’s attention to the absence of proper dress code and random violation of COVID-19 protocol by officials working at the Lagos airport.

The aggrieved management consultant also disclosed that she was shocked to observe that those at the helms of affairs, who should know better, are actually the ones violating them.

“First step on arrival is for the COVID health/clearance which is not in your domain. On this my complaint is with the dress of the officers. They are dressed in potpourri of clothing-many colours like Joseph’s. What would it take to give them T.Shirts in one colour and put a label on it Health Officer or COVID Protocol/

“Then the queue begins to snail towards immigration. A snail would have overtaken us many times without number by the speed of our movement. So, I set out to be objective in my analysis: (a) There are three layers of checks at the Immigration (b) First layer appears to be NDLEA.

“NDLEA had 2 desks and 2 officers – curiously one had no mask on. I asked for his mask and he picked it up from somewhere to show me. He did not have it on and we had just been subjected to a COVID test check-paid huge sums to get a test in the UK before the trip (£125) and paid for the Nigerian test at N50k. So it is a huge joke to find officials not wearing masks at the NDLEA and Immigration desks,” she said.

Awokoya also declared that the unnecessary delay travellers are subjected to can be avoided if officials of the National Drug Law Enforcement Agency and Nigeria Immigration Service conscientiously do their job.

According to her, the noticeable lapses and bottlenecks are further compounded by the uniformed agents who she alleged also run a racket at the airport.

“So about 2 or 3 flights arrived about the same time, so that explains the long queue, but what is grossly unconscionable is to have 2 officers of NDLEA on duty to attend to over 600 passengers, knowing that without their own clearance, the immigration cannot take their turn.

“Two officers created and create the bottleneck. (c) The Immigration officers process is cumbersome-one person checks something first on the passport and then hands over the passport to another person for stamping-just plain waste of time in my opinion.

“In my view, the 2 officers could have been doing the checking and stamping and not one doing one process and another doing another. Again there were just too few immigration officers on duty. We have all been to other countries. In the UK, once there is a surge of passengers, more booths are opened up to take care of the surge. Surely coming back home to one’s country should not be a tedious and tiring process.

“Another problem is that there are way too many officers loitering who could have been put to use where they were really needed. Of course citizens were upset. Many ranted, many fumed. It was incredibly difficult to defend Nigeria with such gross ineptitude.

“The AC was not put on-We discovered that it was functional after about 40 minutes of intense heat, when just easily, the ACs started emitting some cold air. Another annoying thing was the number of times that immigration officers came to the queue to call out some people for preferential treatment. There were many of us who defended Nigeria by saying that people queue for long periods even at Heathrow or JFK, but when eventually you discover that the problem lies with processes, then you can’t excuse this as it is incomparable with the queuing abroad.

“Dear Honourable Minister sir, Rauf Aregbesola, the failure is yours sir. The same problem is the racketeering occurring in procurement of Passports. Let me not go there at all. I have always believed that you are the right man for the Ministry. You still have time to sort out the rot in the Airport. Please do not fail the President Buhari and do not fail the nation sir. I come in peace,” she appealed.