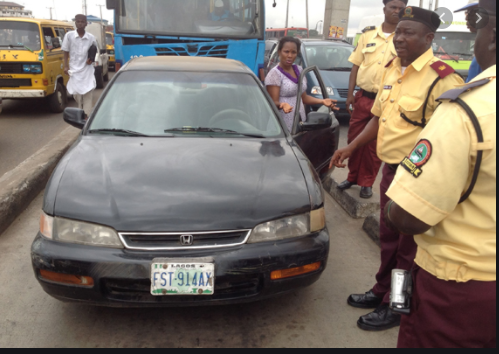 Operatives of the Lagos State Traffic Management Authority, on Thursday announced that it has arrested a gang of two ‘One Chance’ robbers at Ikate in Lekki area of the State.

The robbers were apprehended at about 11.30pm after LASTMA officials stopped a wine-coloured Toyota Camry which was suspiciously driving against traffic.

LASTMA Assistant Director of Public Affairs, Olumide Filade, stated that while the driver was being interviewed by the officers, a lady raised the alarm that it was a ‘On Chance’ vehicle.

“The lady said that she boarded the vehicle unknowingly that it was a one-chance vehicle, she further narrated that all her valuables were forcefully taken away from her and they include her phone, ATM debit card and some other items.

“The two one-chance robbers and the victim were subsequently taken and handed over to the police division at Maroko by the LASTMA officers for thorough investigation and prosecution by the police.

“The General Manager, LASTMA, Olajide Oduyoye, in his comment praised the LASTMA officers who carried out this feat and said that LASTMA does not only manage traffic on Lagos roads but also render humanitarian services on our roads.

“He recalled the assistance rendered by some LASTMA officers to a pregnant lady and her child at Fagba area of Iju-Ishaga axis of the State, who had an accident on a commercial motorcycle that plied one-way about a week and a half back now.

“Oduyoye enjoined Lagos residents to always be vigilant when embarking on commercial vehicles, insist on drivers obeying the Lagos State Traffic Law as promulgated by the Lagos State House of Assembly and generally encourage our traffic officers while on their duty posts so that they can do more,” he said.