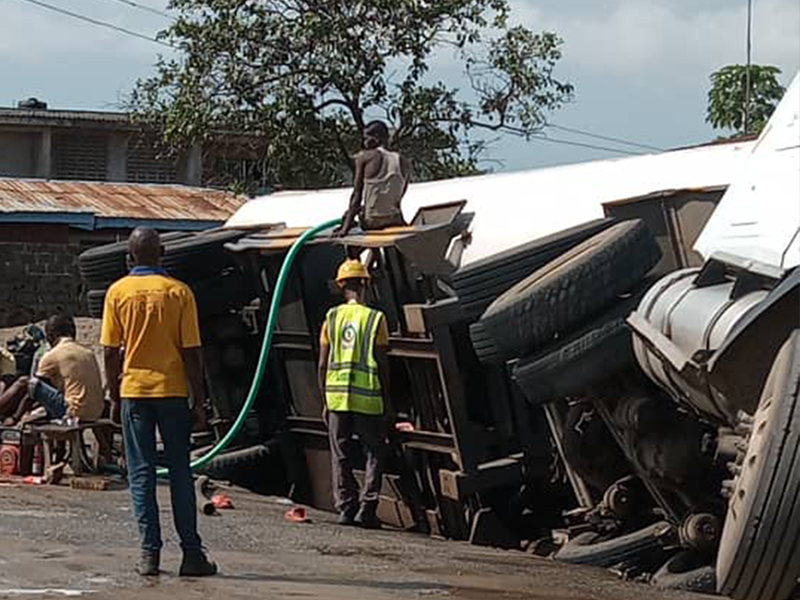 In a statement released by the LASEMA Head of Public Affairs, Nosa Okunbor, on Thursday, July 1, 2021, the agency disclosed that an articulated tanker loaded with 33,000 litres of Petroleum Motor Spirit fell on its side while attempting to manoeuvre its way into a filling station and spilt its contents on the road.

Okunbor, according to the statement made available to WuzupNigeria, revealed that LASEMA and its collaborators were on “high alert” at the incident to avert fire and the resultant devastation that would have followed if the content had exploded.

“On getting to the scene of the incident, it was discovered that a Mack truck conveying an oil tanker loaded with 33,000 litres of PMS fell into drainage.

“Further investigation conducted revealed that the Mack truck while trying to enter into “NAMOS” filling station went too close to the drainage and unfortunately, edge of the drainage caved in and the truck tilted to the left and eventually fell onto its side.

“No loss of lives, nor injuries were recorded.

Okunbor added that the trans-loading operation was safely completed and there was no spillage from the fallen tanker.

Related Topics:BadagryLASEMAtanker explosion
Up Next