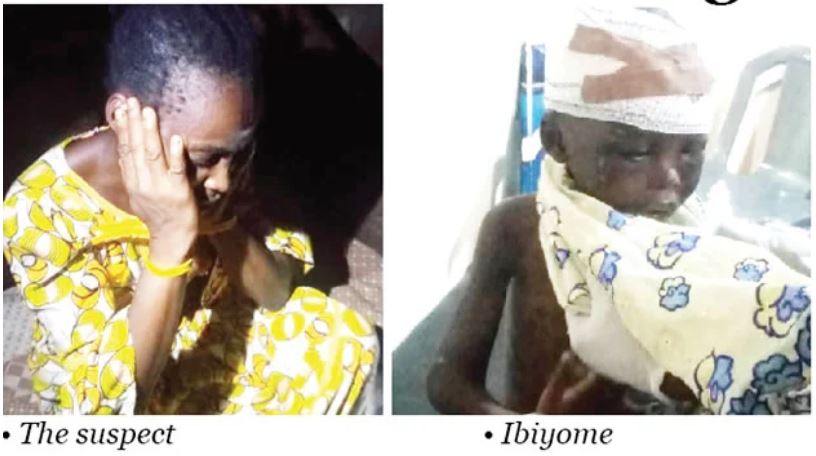 The Lagos State Police Command on Thursday says it has arrested a 43-year-old woman, Sharon Williams, for allegedly locking up and dehumanising her five-year-old nephew, Micheal Ibiyome, for six months.

PUNCH reported Ibiyome lived with the suspect in Gberigbe community in the Ikorodu area of the state.

The suspect was alleged to have used a cutlass to inflict injuries on the back of Ibiyome’s head.

The plight of the toddler was brought to the notice of Lagos State Ministry of Women Affairs by a neighbour.

The case was subsequently transferred to the state Ministry of Youths, Sports and Social Development, which effected the arrest of the suspect was arrested around 8pm on Wednesday at her residence.

The Lagos State Deputy Coordinator for Child Protection, Lateef Akinborode, said it took about five hours for the suspect to surrender herself for arrest after security agencies tried to gain access into her apartment.

He said, “The boy was denied access to education, feeding, health care, love, affection and free movement. We were there yesterday (Wednesday) for five hours before we were able to rescue the boy after several attempts to gain access into the house of the perpetrator with the support of the Lagos Neighbourhood Safety Corps, Ijede, and the Nigeria Police Force, Area N, Ijede. She eventually opened the door and she was arrested.

“The boy was found behind a fridge in the sitting room with a very deep cut on his head and several injuries on his body. His hands were already stiff as a result of being tied up for too long. He was rescued and is currently receiving treatment at the Ijede General Hospital.”

After the security operatives secured the boy, the suspect was taken to the Ijede Police Station.

When contacted, State Police Public Relations Officer, Olumuyiwa Adejobi, could not be reached as of the time of filing this report.

He did take his calls or respond to a text message sent to him on the incident.