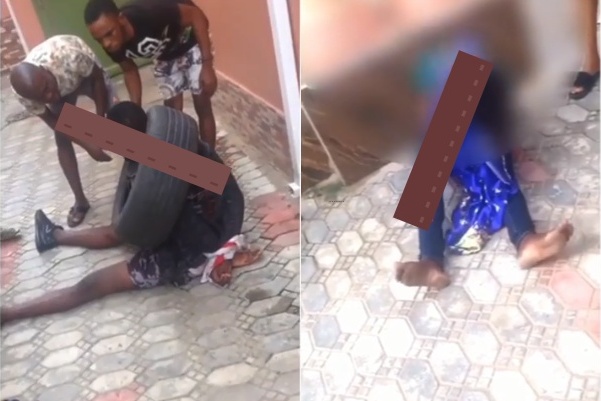 A yet-to-be-identified lady has reportedly gone insane after spending the night with a man identified simply as Solution in Badagry area of Lagos.

The lady was seen in a viral video acting like she is mentally deranged.

WuzupNigeria could not confirm if the lady is a hooker or the suspect’s girlfriend.

Solution was alleged to have taken the lady to his home on Tuesday night, but on Wednesday morning the lady started displaying signs of insanity which raised concerns among neighbours who gathered round to watch her and asked questions.

Eyewitnesses say the lady initially started acting strangely before she started shouting the name of her host.

The suspect was seen being interrogated by a mob of residents who have put a tyre around his neck before reportedly dragging him to the police station.

In the footage which is presently making the round on social media, the lady was seen sitting on the floor, shouting and acting erratically.

Residents who had gathered round to catch a glimpse of the incident could be heard in the video passing some damning verdict about the suspect and his suspicious activities in the neighbourhood.