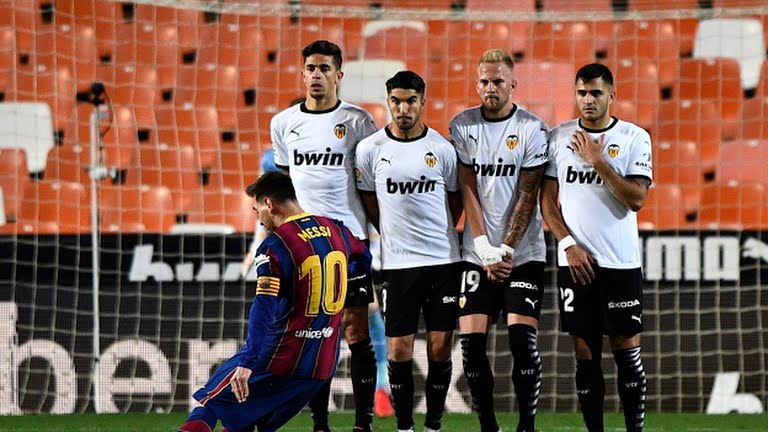 The Blaugrana who were without their suspended head coach, Ronald Koeman, needed the win to keep pressure on Real Madrid and Atletico Madrid, with four matches to go.

Led by Alfred Schreuder, Barcelona were stung by the hosts in the 50th minute when Soler’s corner from the left-hand side beat Ter Stegen and fell in the path of unmarked Gabriel who headed the ball into the empty net.

But the hosts soon gifted Barca a penalty as Toni Lato handled the ball in the Valencia box, earning a yellow card for the foul.

Lionel Messi had his initial shot from the spot-kick saved by Valencia’s Cillessen. Busquets picked up the rebound and a follow-up from Pedri was blocked by Gabriel on the line before Messi scrambles a left-footed strike into the back of the net to make it 1-1.

Antoine Greizmann poked in Barcelona’s second with a left-footed close-range effort to give the visitors a 2-1 lead in the 63rd minute before Messi Messi made it 3-1 with a 20-yard freekick. The ball was perfectly whipped over the wall and into the goal off the right-hand post in the 69th minute.

Valencia however reduced the deficit through Carlos Soler in the 83rd minute with a long-range effort from 35 yards.

Barca remain third on the log with 74 points, alongside Real who are also two points behind league leaders, Atletico after 34 matches.

Meanwhile, the La Liga title remains a four-horse race as the top three clubs await the outstanding match of fourth-placed Sevilla who are just four points behind Barcelona who face Atletico next weekend.