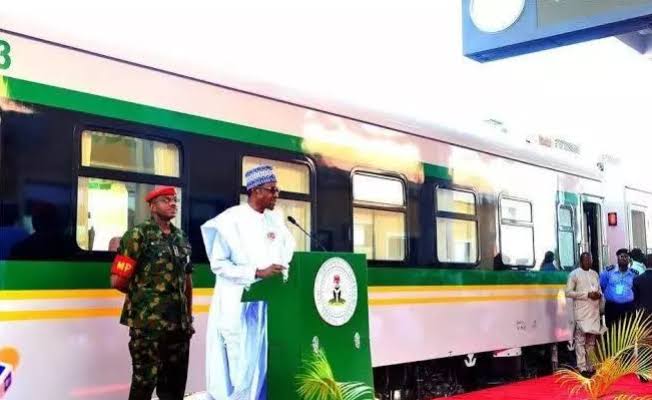 The Minister of Information and Culture, Alhaji Lai Mohammed, says posterity will be kind to President Muhammadu Buhari for embarking on massive infrastructure development in the country.

The minister stated this on Tuesday in Katsina at the Ground Breaking Ceremony of the Kano-Katsina-Jibiya-Maradi rail project.

The News Agency of Nigeria (NAN) reports President Buhari performed the ceremony virtually while other dignitaries were physically present.

Govs Aminu Masari of Katsina State, Abdullahi Ganduje of Kano State, Abubakar Barawu of Jigawa and Sanni Saidu of Maradi in Niger Republic were present at the event.

Speaking at the ceremony, Mohammed said after a successful completion of his administration, Buhari will be remembered for leaving a legacy of massive infrastructure development in the country.

“Infrastructure and economic development have been the watchword of the President and posterity will be very kind to him.

“What we have witnessed today is deepening of the infrastructural development that will bring prosperity and economic development to everybody, particularly the people of Kano, Dutse, Kazaure, Katsina, Jibiya and Maradi,” he said.

The minister said some people had questioned the rationale behind extending 25km of the rail line to Niger Republic.

He reiterated his position that the reason was for the development of the nation’s economy.

“What we have done today, that is the rail from Jibiya to Marad, will make it cheaper for the exporters and importers to bring their goods via the rail to our ports,” he said.

Earlier in their respective remarks at the events, the Governors of Katsina, Kano and Jigawa States commended the President for his efforts on infrastructure development in their zone and across the country in general.

Masari said his state is the greatest beneficiary of the project, urging for its speedy completion before the end of the administration.

On his part, Ganduje said the project would enhance the status of Kano State as the commercial nerve center of the country and the sub-region.

He also thanked the President for the several federal road projects in the state particularly the Abuja-Kano Expressway, the Lagos-Kano rail line as well as the expansion of the International Airport in the state.

Gov. Badaru thanked the President for coming to the rescue of many states at the fringes of collapsing especially when about 27 state governments could not pay the salaries of their workers.

He also thanked the President for the Paris Club refund to the states disclosing that Jigawa benefitted over N40 billion from the fund.

The Maradi Governor said the project is a landmark of the good relationship between Niger Republic and Nigeria, and that it would help his country’s transportation system particularly in the movement of goods and people

The minister supervising the project, Amaechi, said that it would reach a substantial completion by 2023 when it will be ready to handle passengers and freights

Specifically, Amaechi said no fewer than 9,364 passengers and approximately 3000 metric tons of freight will be ferried daily on return trips between Kano and Maradi on the rail line.

NAN reports the rail project traverses Kano and passes through other economic hubs of the country including Kazaure, Daura, Katsina and up to the border town of Jibiya and the Niger Republic city of Maradi.

The cities of Jibiya and Maradi are significant trading core between Nigeria and Niger Republic with a tradition dating back many centuries.

When completed it is expected to establish an end-to-end logistic supply chain in railway transport services between the Northern and Southern regions of the country.

NDLEA seizes cocaine worth over N32bn in Tincan Port